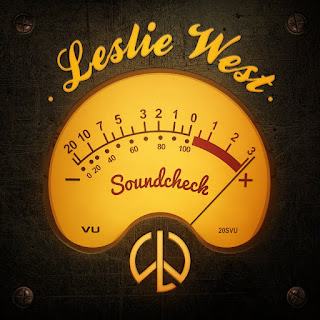 Guitar God Leslie West will be roaring once again come on November 20th, 2015 when Provogue Records releases his 16th solo album, titled Soundcheck. The follow-up to West’s critically-acclaimed 2013 set Still Climbing, the new disc seems to be a mix of new material and previously-unreleased performances that have been pulled from the archives, given a new coat of attitude, and unleashed on the public on Soundcheck.

West tackles the blues standard “Goin’ Down” with the ferocity of Freddie King. Joined by Queen’s May on guitar, pianist Middleton, legendary Muscle Shoals session bassist David Hood, Bobby Whitlock on keyboards, and Bramlett on backing vocals, West tears through the song like a hungry dog into a t-bone, sharing solos with May, the two guitarist’s differing styles oddly complimentary. Soundcheck also features a reverent, haunting cover of Curtis Mayfield’s soul classic “People Get Ready,” which offers some incredible guitarwork; a reading of Tracy Chapman’s hit “Give Me Just One Reason,” performed in a soaring blues style; and a raucous live version of Willie Dixon’s “Spoonful,” recorded in 1988 with Jack Bruce on bass and vocals, and Joe Franco on drums.

West’s sizzling slide-guitar playing is punctuated by Frampton’s fretwork on a minor-key cover of “You Are My Sunshine” that represents another odd musical choice. “I watch the television show, Sons of Anarchy,” says West in a press release for Soundcheck, “and during one episode, a minor-key version of this song was playing in the background. I thought, Whoa…that sounds so different! I recorded it and sent it to Peter, and we trade solos and then play harmony lines together at the end. Also, I’m playing slide while he’s playing conventionally. His tone is phenomenal on this, with a warm sound and a really nice vibrato, and he loved the arrangement. To take a song you’ve heard all of your life and change it around like this is very cool.”

Considering a career that dates back to the Vagrants in the late 1960s, hard rock titans Mountain during the 1970s, and a legendary solo career that has spanned five decades, West muses “you know, when it comes to talent, we don’t all move at the same rate of speed. Some people start at the top of their game and after 10 or 20 years you wonder what the hell happened to them. I like to joke that the older I get, the better I used to be, but after giving up drugs and smoking, my voice can hit notes that I never could reach before. I’m thankful for that.” Listening to Soundcheck, it just might be West’s best of a long and accomplished career.