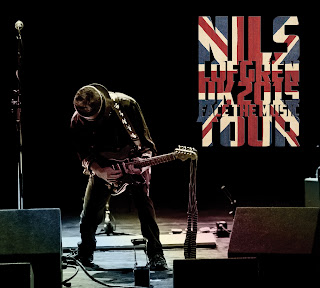 It’s no secret that we’re Nils Lofgren fans ‘round these parts…the Reverend has been following the talented singer, songwriter, and guitarist since his late 1960s band Grin and his early ‘70s solo work. Lofgren’s membership in the high-profile E Street Band, backing up Bruce Springsteen on stage and on record, helped prolong and pump some longevity into his solo career.

In spite of the release of last year’s ten-disc, career-spanning CD box set, we still consider Nils to be one of the most criminally-underrated talents in rock ‘n’ roll. Whether you’re a Nils fanatic or not, there’s no denying that the man has created a heck of a lot of great music!

On November 13th, 2015 Lofgren will be adding to his immense and impressive back catalog with the release of UK2015 Face The Music Tour on both CD and as a digital download. After the release of Face The Music – the aforementioned box set – Lofgren organized a series of solo and duo acoustic shows to promote the retrospective collection.

In January 2015, Nils toured the U.K. and performed to enthusiastic audiences, with several shows recorded for posterity. It’s these shows that are documented by Lofgren’s UK2015 Face The Music Tour album. Lofgren sings, and plays guitar and keyboards, accompanied by multi-instrumentalist Greg Varlotta. The result is an inspired collection of intimate performances that showcase Lofgren’s talents in the best light.

In a press release for the new album, Lofgren says “after a three year break from our traditional acoustic U.K. tours, we headed back in the dead of winter, excited for another run of shows, town to town, on the bus, sharing music that hopefully spreads some good will and hope to linger with the wonderful audiences we've had, decade after decade. Accompanied by Greg Varlotta, our friend and amazing, multi-instrumentalist and our stellar crew, we all set out to do special, inspired shows everywhere.”

Continuing, Lofgren adds, “we were all thrilled with the audience response and it was Amy [Nils’ wife] who insisted we record the last half of the tour, optimistic it could lead to an album of live tracks to commemorate this wonderful U.K. run. She was right and here it is. We hope you all enjoy it. It really is the audience that breaths the life, fire and inspiration into every performance. God bless you all and thanks again for your presence and magical energy, night after night, town after town, note after note. Peace and Believe.”