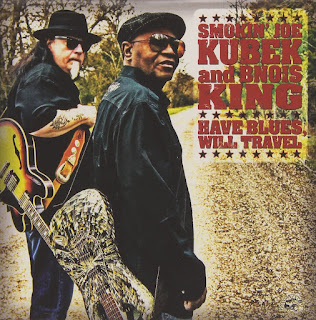 After better than two decades playing together, the chemistry between blues guitarists Smokin’ Joe Kubek and Bnois King is undeniable. The two fretburners have developed a distinctive blues-rock sound that they seldom stray too far away from, and long-time fans will be relieved to know that Have Blues Will Travel follows this tried-and-true Kubek/King formula to a tee; that is, guitar-driven, houserockin’ gutbucket blues delivered with Lone Star state panache.

Musically, the scorching title track “Have Blues Will Travel” masterfully blends ZZ Top-styled booger-rock with hints of Lynyrd Skynyrd’s Southern soul, and runaway locomotive rhythm. Lyrically, the song is a bluesy tale of woe that involves wife-cheatin’, barfights, a hangin’ judge, and jail time, i.e. an average day in the life of the itinerant bluesman. The slumbering groove of “Out Of Body, Out Of Mind” burns no less brightly, King’s growling vocals rumbling above a blistering twin-guitar attack that snaps, crackles, and pops right out of your speakers.

If Have Blues Will Travel misses a note here or there, it’s with contemporary novelty songs like “RU4 Real,” which nonetheless has time-honored blues tradition on its side, or the tired “My Space Or Yours?,” a rollicking shuffle that incorporates tech lingo into a double-entendre attack on the listener’s intelligence. By contrast, the topicality of the working class blues of “Payday In America” will withstand the test of time, the blue collar tale of cuttin’ loose on the weekend bolstered by Kubek’s razor-sharp slide-guitar and King’s soulful, world-weary vocals.

Much of the rest of Have Blues Will Travel will certainly please the dedicated blues-rock fan, such six-string showcases as the menacing, mid-tempo “Shadows In The Dark” or the hard-rocking positive vibe and message of “One Step At A Time” offering plenty of energetic fretwork and explosive, intertwined guitars. Few instrumentalists can tag-team a song like Smokin’ Joe Kubek and Bnois King, the aforementioned chemistry between the two men lifting Have Blues Will Travel above the morass of Stevie Ray-cloned guitarists to achieve higher altitudes of ambition. (Alligator Records, released May 25, 2010)

Buy the CD from Amazon.com: Smokin' Joe Kubek & Bnois King's Have Blues Will Travel
Posted by Rev. Keith A. Gordon at Tuesday, October 13, 2015