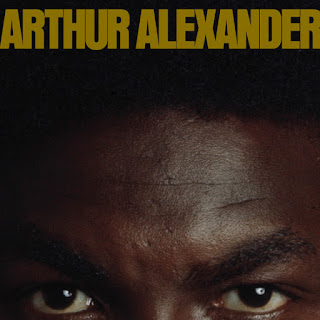 The good folks at Omnivore Records have been on a roll as of late, what with current or upcoming reissues of classic recordings from Big Star, Alex Chilton, and Game Theory to their credit. One title that may fly under your radar, however, is the archive label’s reissue of soul giant Arthur Alexander’s self-titled 1972 album, which will be released with six bonus tracks on July 28th, 2017.

An extremely talented songwriter and too-frequently-overlooked singer and stylist, Alexander scored a number of minor R&B chart hits throughout the 1960s with songs like “Anna (Go To Him),” “You Better Move On,” and “Soldier of Love,” many of which were recorded at the Fame Studios in Muscle Shoals, Alabama and featured musical contributions by the studio’s legendary Muscle Shoals Rhythm Section.

Alexander only released three albums during his lifetime, this self-titled 1972 “comeback” set for Warner Brothers Records the best-known of the trio. Recorded in Muscle Shoals and produced by bassist Tommy Cogbill, the album features such talents as guitarists Eddie Hinton and Reggie Young, drummer Kenny Malone, and keyboardists Shane Keister and Bobby Emmons. It’s Alexander’s incredible vocals that imbue the album with great heart and soul, however, and whether he’s singing his ass off on originals like “Go On Home Girl” and “In the Middle of It All” or co-writes with Donnie Fritts like “Come Along With Me” and “Thank God He Came,” Alexander always poured 110% of himself into a performance.

Arthur Alexander, the album, also includes the singer’s versions of several tunes penned by noted Nashville songwriter Dennis Linde, Alexander bringing a bit of country soul to songs like “I’m Comin’ Home,” “Call Me Honey,” and “Burning Love” (later a huge hit for Elvis Presley). The Omnivore reissue of Arthur Alexander includes the album’s original twelve tracks as well as six bonus tracks – two of which are previously unreleased and from the original recording sessions – including the singer’s two non-album follow-up singles for Warner Brothers.

By the end of the ‘70s, Alexander was out of the music biz, driving a bus until his classic self-titled album was reissued in 1993. Inducted into the Alabama Music Hall of Fame in 1990, Alexander returned to performing, releasing his third and final album, Lonely Just Like Me, before his premature death in 1993 at the age of 53 years old. Alexander’s music had an impact, though, his songs covered by artists as diverse as the Beatles, the Rolling Stones, Jerry Lee Lewis, Otis Redding, Humble Pie, George Jones, Pearl Jam, and many others.

The reissue includes new liner notes by music historian Barry Hansen (a/k/a Dr. Demento), who was a Warner Brothers staff writer when the album was originally released. In his original notes, Hansen wrote “Arthur is especially proud of the variety and versatility of his work on this album. All of it is strong medicine, and should be a fine antidote for a lot of bad scenes.” In these tumultuous times, as in ’72, we could all use a little more soul in our lives, and few sung it as well as Arthur Alexander. If you don’t know him, now’s your chance to rediscover this underrated artist.