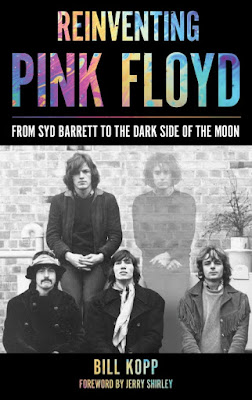 It’s only fitting that our final news story of 2017 should be about friend and colleague Bill Kopp. A veteran music journalist and critic, Bill has written for publications like Blurt magazine, Goldmine, Prog (U.K.), Ugly Things zine, and Record Collector (U.K.), among others, as well as tending to his own excellent Musoscribe blog. Now Kopp has another lofty credential to add to the list – his first book!

On February 15, 2018 Rowman & Littlefield will publish Kopp’s Reinventing Pink Floyd: From Syd Barrett to the Dark Side of the Moon. In celebration of the 45th anniversary of the band’s groundbreaking Dark Side of the Moon LP (released in ’73), Kopp takes a look at Floyd’s reinvention after the departure of band founder Barrett as well as the musical evolution of the band that would result in the aforementioned breakthrough album that would subsequently spend an unparalleled 741 weeks on the Billboard charts (that’s better than 14 years!).

Kopp explores the band’s attempts to establish a fresh musical identity and style after the loss of their brilliant band leader, including the obstacles, experiments, creative missteps, and eventual development of the influential “Pink Floyd” sound that would result in a handful of bona fide classic albums (Wish You Were Here being my personal favorite). Kopp worked from archival interviews and reviews to put together a history of the band circa 1968 through 1973, adding information glommed from exclusive interviews with folks like Steve Howe (Yes), Jerry Shirley (Humble Pie), Davy O’List (The Nice), Robyn Hitchcock, and many others.

The result is a tome that every Pink Floyd fan or any lover of the classic rock era is going to want on their bookshelf! You can pre-order Revinventing Pink Floyd right now from Amazon.com...
Posted by Rev. Keith A. Gordon at Friday, December 22, 2017