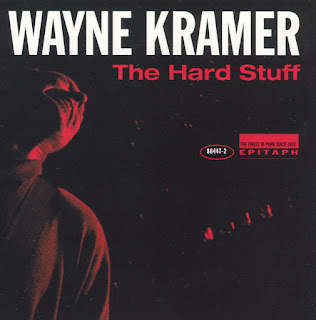 The MC5 – with guitarist extraordinnaire Wayne Kramer  – are one of those bands that has grown large in legend, receiving much more acclaim after their demise than they ever did during their brief artistic and commercial life span. As the cultural arm of the White Panther Party during the late ‘60s, the Detroit-based band mixed radical, “power-to-the-people” styled politics with crunching power chords and primordial metallic rock and roll. Along with fellow Motor City rockers Iggy & The Stooges, the MC5 did more to influence the punk rock revolution that would define the late ‘70s than any other band, save, perhaps, the New York Dolls.

Twenty-five years have passed and here's Kramer resurfacing with his solo debut disc. At a time when most forty-something-year-old artists from the 1960s are totaling up their mutual fund yields and cranking out safe-as-milk reunion albums, Kramer’s The Hard Stuff burns and scrapes like a shot of raw whiskey with a broken glass chaser. Recruiting an all-star team of punk rockers, including members of Rancid, Bad Religion, Clawhammer, and the Melvins, Kramer shows that he can still run musical circles around the young ‘uns.

Along with co-writer Mick Farren, Kramer has assembled eleven killer cuts for The Hard Stuff, with songs like “Edge of the Switchblade,” “Junkie Romance,” “Incident On Stock Island,” and “Crack In the Universe” brimming over with the sort of street poetry, colorful imagery and sheer attitude we haven't seen since Lou Reed’s day in the sun. It’s the music that truly sets The Hard Stuff apart, however, as Kramer’s guitar screams, cries, moans, and roars with a passion and a ferocity few players can even attempt, much less coax from their instruments. A quarter of a century may have passed since the MC5 broke up, but Kramer proves with The Hard Stuff that he can still kick out the jams. (Epitaph Records, released January 1995)

Buy the CD from Amazon.com: Wayne Kramer’s The Hard Stuff
Posted by Rev. Keith A. Gordon at Sunday, October 28, 2018