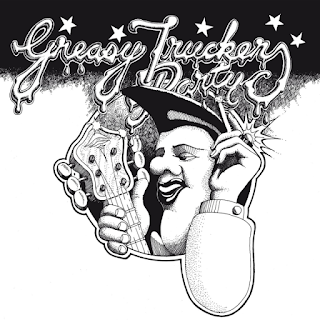 The “Greasy Truckers Party” was a benefit show for Greasy Truckers, an English flower-power group raising money for a number of social causes. Held at The Roundhouse in London on February 13, 1972, the show bill featured the improbable trio of Hawkwind, Brinsley Schwarz and Man. Originally released as a two-album set back in the day, the original eight-track tapes were recently unearthed, cleaned up, and reissued as a proper thee-disc set featuring complete performances from each of the three headlining bands. In a couple of cases (Man, Brinsley Schwarz), the chance to hear the complete set is quite breathtaking – on the original LP, for instance, only two of Man’s five distinctive performances were offered, tho’ that did include the incredible “Spunk Rock.”


Prog-rockers Man opened the show strong with a set that included their impressive twenty-two-minute jam “Spunk Rock.” The song features some incredible interstellar fretwork from Mickey Jones and Deke Leonard, the two guitarists seemingly engaged in some earth-shaking duel as their jagged riffs and razor-sharp leads intertwine like concertina wire. Drummer Terry Williams acts as both a referee and a cheerleader here, his steady, explosive drumbeats providing a constant barrage of rhythm and noise for the two six-string gladiators to build upon. The song’s ever-shifting time signatures, emotions and directions is enough to put many of today’s limp-wristed so-called  “virtuoso” jam bands to shame. 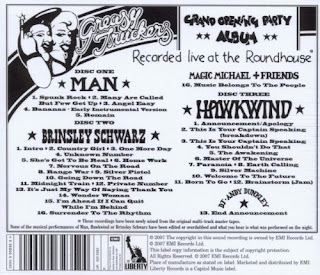 It would be tempting to say that the remainder of Man’s set was a letdown after the high-flying antics of “Spunk Rock,” but ‘tain’t so…the band clearly set the bar high and then attempts to demolish it with an impressive set of material, the band clearly influenced by the sounds emanating from San Francisco over the previous five years. Shimmering guitars and subdued rhythms lead into the scary, riff-driven, semi-psychedelic “Many Are Called But Few Get Up,” which sounds eerily like Volunteers-era Jefferson Starship at their dark, menacing, flower-power-is-kaput best. Once again, Williams’ machine-gun drumbeats provide the foundation for some really spacey and entertaining guitarwork.

“Angel Easy,” the other carryover from the original Truckers LP, is a shorter, more traditionally-structured rocker with distant vocals and a slightly funky rhythmic undercurrent. Whether it’s Leonard or Jones kicking in the notes here, the guitars set the pace for the song to rumble along like QMS on any given night at the Fillmore. The fourteen-minute “Bananas” sounds every bit like the band had been torching some peels on its way to the show, a mild hallucinogenic cloud settling over a rollicking pub-rock rhythm. The song extends for a whopping 14-plus, which lends itself to all sorts of cosmic abuse, lane changes, and slippery mountain curves. The set-closing “Romain” is pure electric booger-rawk, with long sweeping rhythms, bent-wire guitar tones and some of the most brilliantly bombastic drumming that you’ll ever hear. 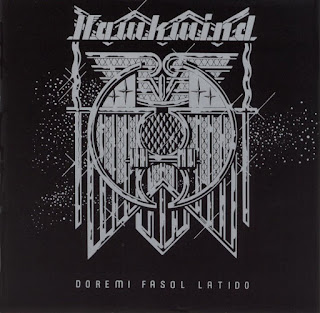 Hawkwind closed the show with its unique psychedelic space-rock, punctuated by Robert Calvert’s bizarro poetry. The Hawks’ set suffered from some initial sound and power problems – a bit of a drag, indeed, for a band whose entire vibe was built upon the manic manipulation of the sonic realm. Nevertheless, by the time that the band gets its set off the ground and launched towards the stratosphere with the lengthy “You Shouldn’t Do That,” the chemically-assisted among the audience were soaring wing-to-wing alongside ‘em, if you know what I mean (and I think that you do). After all, this was ‘72 kiddies, and mind-altering goodies like LSD and ‘shrooms, and even peyote had yet to be bulldozed in favor of the extreme highs-and-lows of coke and ‘ludes (and the coming tragedy of the disco era).

Even if many in attendance had brought their aviator helmets and flight jackets with them, nothing could have prepared them for the lightspeed, white lightning, brightly-flashing magic migraine that was Hawkwind in its prime. This is Lemmy the K era ‘wind, with wings of razor-sharp titanium and the most god-awful sonic roar heard this side of purgatorio. “You Shouldn’t Do That” starts with the sound of full-thrust afterburners and steadily climbs to a crescendo build upon shards of crystal riffage, claustrophobic drumbeats, and switchblade synthesizers. You didn’t have to be as high as a Greek god sitting in a stupor on Mount Olympus to enjoy this stuff, but it didn’t hurt any, either.

Not that the old Reverend would prescribe dangerous substances to his gentle readers, but as one who was around back in ‘72 and…ahem…as someone with a taste for various illicit mind-benders and cerebellum-snacks, Hawkwind was definitely playing my song. “The Awakening” is like falling headfirst into a shimmering puddle of quicksand, as slug-like, squiggly guitar lines and odd bodkins synth-squawks leave a slimy, colorful trail across your skullpan. “Master of the Universe” is a delightful proto-metal spacewalk with stunning fretwork, Lemmy’s incandescently heavy basslines, and steady backbreaking rhythms clearly spawning the entire glut of “New Wave of British Heavy Metal” bands that would stumble into the future from the Roundhouse’s doorstep that night. 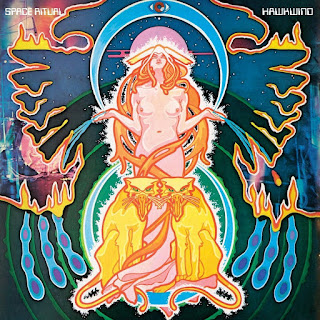 Of course, Hawkwind was never a band to leave an audience simply awestruck when they had a real opportunity to thoroughly reprogram their collective gray matter (reference: the band’s subsequent Space Ritual LP). Devoid of hope, the dark vibe of “Paranoia” is overwhelming in its desperation, but the short, sweet, shock-to-the-brain that is “Earth Calling” is pure Kafka set to something that approximates music, an alien-encounter with intense-sound-and-emotion unheard of in these parts of the galaxy. The out-of-this-world, hard rocking “Silver Machine” was as close to a hit song as Hawkwind’s merry pranksters were ever going to experience (albeit in a slightly different form). Almost traditional in its rock-and-roll aspirations, the song includes some high-flying synth work among its scorching guitars and driving rhythms nonetheless.

The band’s final tune here, the free-form “Brainstorm,” is a cosmic-orgy of massive proportions, a sheer lysergic-fueled attempt at traversing time and space, a mock-battle where no single instrument dominates, but rather they tend to all meld together into a singular noisy conglomeration of sound and fury. When a random guitar or voice does manage to break out of the musical miasma, it’s only to herd the listener back into the hive with electric cattle-prod efficiency. This is the kind of transcendent, out-of-control moment at which Hawkwind often excelled, and their attempt to rewrite the laws of physics that February night back in ‘72 is duly appreciated.

In the middle of the night, however, tucked between the two dynamic, prog-oriented monoliths, was Brinsley Schwarz (with a pre-cool Nick Lowe). The pub-rockers faced down a hostile crowd, winning them over with their exclusive blend of pre-No Depression twang-rock and blue-eyed soul. Whereas the previous two bands left the audience in awe of their mighty instrumental powers, the Brinsley boys pursued a vision of pure songcraft with actual melodies, choruses, and catchy hooks. “Country Girl,” one of the band’s signature songs, is a gently-rolling Byrdsian outtake with more keyboards and less 12-string, while “One More Day” is a playful mid-tempo country rocker that would have fit right in on any Uncle Tupelo album. 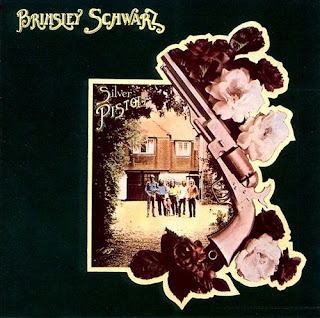 The R&B stomp-and-stammer of the vintage Otis Rush tune “Home Work” benefits from some manic string-mangling, while the Nick Lowe rocker “Nervous On the Road (But Can’t Stay At Home)” offers up swaggering soulfulness, Bob Andrews’ Staxian keyboard riffing, fine vocals and subtle touches of rockabilly-tinged guitar. Blessed with two considerable songwriters in Lowe and Ian Gomm, the band had a wealth of material to choose from. Gomm’s “Range War” is a romping, stomping melodic twangfest that expands upon late-era-Byrds with ringing guitars, rapidfire keyboard-bashing and some truly odd lyrics – something about an Old West fracas with six-shooters and, for some strange reason worthy of Hawkwind’s poetic nightmares, Marvel Comics’ anti-hero the Silver Surfer.

Paradoxical title aside, the song is a freak-folk ballad featuring Schwarz’s finely-crafted guitarwork, mournful vocals, and weeping rhythms … a heartbreaking hillbilly lament if ever there was one. Lowe’s wonderful “Surrender To the Rhythm” is a fine example of what Brinsley Schwarz did best, a seamless fusion of Nashville-by-way-of-Camden-twang with a rolling R&B backbone, ‘60s-era pop aspirations and an “anything goes,” ‘70s rock mentality that lends a timeless quality to a relatively obscure but vastly underrated pub-rock genre.


Sadly, rather than closing on a high note with the delightful “Surrender To The Rhythm,” the second CD in this set instead crawls out on all fours with the atrocious hippie-cretin blathering of Magic Michael. The sort of free-spirited acid-casualty that the late ‘60s and early ‘70s spit out by the handful, Magic Michael haunted London’s rock underground like a drooling phantom, often gracing the stage during mid-band set changes, offering the audience the measure of his limitless lack of talent.  Michael’s “Music Belongs To the People” is a mindless, improvised mess including members of the audience climbing onstage to “jam” alongside the magic one’s yelping vocals and cacophonic guitar strumming. This insipid, fetid chunk of stoner-era trash wouldn’t cut the mustard at the height of Flower Power’s drug-fueled insanity; in this day-and-age, it’s more painful than a botched root canal by a drunken dentist.

If this all sounds like an odd combination of music that I’ve described for you all well, yeah, it is. Any one of these three bands stands on its own, and all three are distinctly different in both style and ambition. That was the magic of the early ‘70s, however…long before corporate radio and major label homogenization lowered expectations across the board, young music fans had a gluttonous buffet of bands to choose from, and we often ate from the trough with glee. It was a high-flying time for “music-as-culture,” and art often times outweighed commerce. Although it’s unlikely that a performance of the diversity and scope of the Greasy Truckers Party concert could take place these days, the album represents more than a mere cultural artifact – Greasy Truckers Party also captures a magical night of music. (Liberty Records, released November 2, 2007)

Buy the CD from Amazon.com: The Greasy Truckers Party