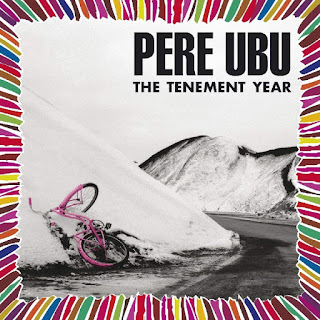 Once upon a time, oh, say a decade ago, in the land of the expanded consciousness, there roamed a merry band of surrealistic music-makers led by a strange, tormented soul known as David. These troubadours, dubbed Pere Ubu by their followers, created a unique hybrid of rock ‘n’ roll, jazz, classical, and avant-garde electronic experimentation which enthralled any listener and served to fire off more than a few lazy nerve synapses. Before they disappeared into total obscurity, they left behind a handful of recordings, modern musical masterworks which illustrated their combined talents and created an artistic legacy of near-mythical proportion.

After several years of meditation, inner reflection, and personal projects Pere Ubu has re-formed to record and release The Tenement Year, an artistic tour de force of major proportions. The band, led by vocalist, songwriter, and poet David Thomas and included the multi-talented Chris Cutler (ex-Art Bears), soars and glides through eleven new, original songs like Icarus triumphant. Aiming for the sun and hotter than a solar flare, Ubu takes conventional musical tradition and turns it on its pointy lil’ head, moshing up a cacophonic blend of strange instrumentation, white noise, and industrial rhythms fronted by the tortured, howling vocals of the frantic Mr. Thomas.

The end result is aural excitement, an album unlike anything you’ve ever heard, sheer mind-expanding vinyl poetry that takes rock ‘n’ roll to a netherland that it’s never before witnessed. Find out for yourself why Pere Ubu’s early works influenced the creations of Joy Division, Throbbing Gristle, Psychic TV, and Devo, among others. The Tenement Year is certain to be every bit as influential. (Enigma Records, 1988)

Buy the CD from Amazon.com: Pere Ubu’s The Tenement Year