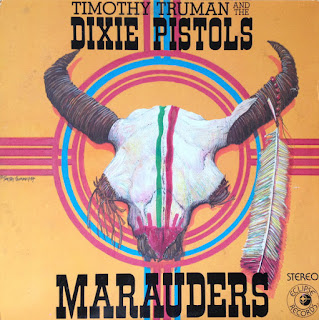 If I’ve said it to you once, I’ve said it to you a million times – the best rock ‘n’ roll music isn’t necessarily found on the major labels. Case in point: Timothy Truman and his merry band of houserockin’ fools, the Dixie Pistols; Truman is best known as the writer, artist, and creator of the Eclipse Comics publication Scout, an intelligent and original graphic portrayal of the United States of the next century, a visionary work that is at once both terrifying and intriguing. A flexi-disc included as a bonus “soundtrack” is an issue of Scout illustrated Truman’s skills as a bona fide rocker and led to the release by Eclipse of Truman’s and their first vinyl project, Marauders.

Truman and the Dixie Pistols practice the working man’s blues, worshipping at the altar of Robert Johnson and kicking out a righteous blend of soul-tinged, blues-infused rock ‘n’ roll madness, creating a mutant hybrid that started 50 years ago in the Mississippi Delta and has roared as an angry golem aboard a hell-bound, lightning-powered locomotive in the soul and spirit of every sad-singing, passionate axeman and artist from Johnson through B.B. King, Albert King, Elmore James, Eric Clapton, John Mayall, and legions of others attending the selfsame shrine. 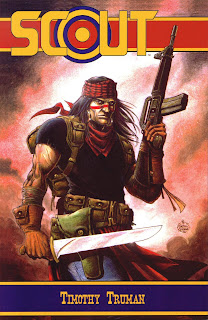 Marauders holds within its grooves the aural essence of the smoke-filled bar, the straight bourbon shot with a beer chaser, and the alluring stare of that woman at the next table. Serving up a healthy dose of house-party, bring-down-the-roof madness, Truman and the Dixie Pistols romp and frolic through ten numbers that are hotter than the dog days of summer and more soulful than a roomful o’ blues!

Marauders is the real thing, folks – sincere, inspired, joyful music unencumbered by music industry expectations, commercial concessions, or corporate image-mongering. Musically, Truman and the Pistols are a skilled bunch of musicians with frequent flashes of brilliance. Although the tunes are derivative in the genre’s style, the material is original and respectful, showing a love for the tradition without being revivalist or patronizing. All in all, Timothy Truman and the Dixie Pistols’ Marauders is an entertaining, enjoyable album and a hell of a love of fun. The best music isn’t necessarily found on those big boy labels, a fact proven by this sleeper of a disc, a solid debut from a group that nobody’s heard of, released by a comic book company. (Eclipse Records, released 1988)