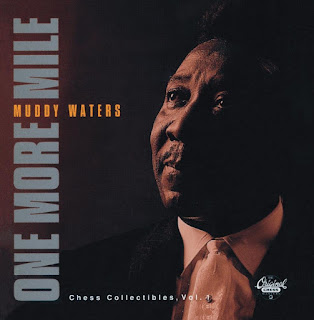 Muddy Waters is one of the most respected bluesmen in history, and perhaps the most revered (and thus, imitated) artist in the genre. Waters, it can be argued, defined the Chicago blues style, while his raucous slide-guitar technique was destined to influence a legion of white rock guitarists. It was long thought that the well had run dry, however, and that every side of note that Waters had recorded had been issued and analyzed, captured on one of his many albums. Thus the pleasant surprise that is One More Mile, a two CD set and the first in the proposed ‘Chess Collectibles’ series that will also see the release of rare material from Howlin’ Wolf, Etta James, and Little Walter, among others.

One More Mile presents material covering a time span from 1948 through 1966, offering a sort of musical chronology of Waters’ career and development. Many of the 41 cuts here are alternate takes and acoustic or unreleased versions of Waters’ signature songs, although there are several obscure B-sides included as well. Alongside versions of such blues classics as “Hoochie Coochie Man,” “Baby Please Don’t Go” and “Crawlin’ Kingsnake” are such wonderful finds as “You Gonna Need My Help” and “My Dog Can’t Bark.” Regardless of the many changes in band members, Waters’ own Delta-influenced style and forceful musical personality always shined through the material.

One of Waters’ greatest strengths was his ability to recognize other artists’ talents, and to successfully blend them with his own. As One More Mile shows, not only did Waters know a great song when he heard one – he recorded material written by a number of songwriters, including Sonny Boy Williamson, Willie Dixon, and Jimmy Reed alongside his own considerable creations, but he also had an ear for other players. Through the years, he played with many great bluesmen, such as Dixon, James Cotton, Otis Spann, Little Walter, and Ernest Crawford, among many others. The resulting collaborations created a legend, one well served by the work found on One More Mile. (Chess Records, released March 15, 1994)

Buy the CD from Amazon.com: Muddy Waters’ One More Mile
Posted by Rev. Keith A. Gordon at Friday, October 04, 2019