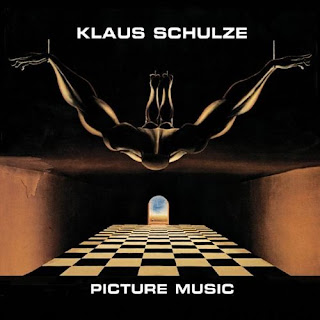 One of the godfathers of contemporary “space music,” composer, musician, and visionary Klaus Schulze was experimenting with electronic tones, synthesized music, and ambient sounds while Eno was still playing the role of rock star. One of the leading lights of the late ‘60s/early ‘70s “krautrock” movement, Schulze was a member of the seminal German outfit Tangerine Dream, playing drums on the band’s influential debut album, Electronic Meditations. Schulze went on to form the psych-rock collective Ash Ra Tempel with Manuel Göttsching, recording a single album with that band before striking out on a successful solo career that is now in its fourth decade.


Recorded in 1973, but not released until 1975, Picture Music was actually the third album recorded by Schulze, although it would be the fourth solo album to be released. Some have said that this is Schulze’s first true “synthesizer” album and I would have to concur. While Schulze’s contemporary Walter/Wendy Carlos used Robert Moog’s pioneering technology to dabble in pop music and film scores, Schulze’s muse took him down an entirely different path. Schulze envisioned sounds as an expression of emotion and thought, using a battery of synthesizers – along with whatever studio wizardry was available in 1973 – to rewrite the rules of musical composition with Picture Music.

While others were content to remain earthbound and chase after traditional musical forms, Schulze had his eyes on the stars with Picture Music. Predicting Brian Eno’s ambitious experimentation in ambient music by a half-decade, and furthering the trailblazing work of his sophomore effort Cyborg, Schulze would tinker with tone, rhythm and the concept of spaciousness on Picture Music. The album opens with the almost twenty-four minute piece “Totem,” a subdued meditative piece that shows Schulze tentatively incorporating the abilities of the synthesizer into his work.

Fragments of rhythm and melody swirl in and out of the piece, lost beneath bubbling electronics and a fragile painting of distance. “Totem” acts as ‘ying’ to its companion song’s ‘yang,’ the twenty-three minute “Mental Door” a more aggressive, percussive piece. The composition starts out dark and quiet, before building to a crescendo of Baroque keyboard riffing, clashing cymbals and jazzy, often tribal drumming. It is a breathtaking piece, as invigorating and energetic as “Totem” is contemplative and introspective.


Due to Schulze’s importance in the field of electronic music, Picture Music has been reissued countless times, mostly by various European labels and often with different cover art and song indexing. This American reissue, by the exemplary prog-rock label Inside Out Music, offers deluxe packaging, rare photos, informative liner notes and best of all, a thirty-three minute, previously unreleased bonus track.

“C’est Pas La Meme Chose,” according to Schulze, is actually an extended, more involved reading of “Totem,” taking the original song’s meditative theme and extending it towards a new horizon. It is a fitting bookend to Picture Music, punctuating Schulze’s influence in the genre and providing a fitting coda to this important and often overlooked entry in the canon of electronic music. (Inside Out Music, reissued April 17, 2005)