Archive Review: Iggy & the Stooges' Your Pretty Face Is Going to Hell (1999) 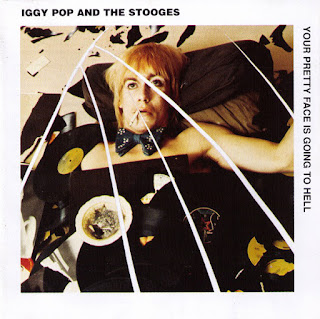 When Elektra Records dumped the Stooges way back in 1971, how could they have known that they had unleashed a literal Frankenstein’s monster of rock ‘n’ roll? Better than a quarter of a century has passed since Elektra released The Stooges and Fun House, and both albums remain happily in print, threatening another young rock generation with their uncompromising musical anarchy and seemingly boundless, chaotic energy. Throw in Columbia’s recent reissue of Raw Power, credited to Iggy & the Stooges and consisting of a reunited and expanded band, and you have three classic albums that, while not chalking up very impressive sales numbers upon their initial release, nonetheless remain among a handful of the most influential rock recordings ever made.

Credit in part is due to Iggy Pop, née Iggy Stooge. Perhaps the most enduring of rock’s legendary wildmen, Iggy’s cult of personality has propped up numerous artistic incarnations and is nearly thirty years old and still going strong. From metalheads to punk rockers, the amazing Iggy is the godfather of them all. This ever-growing fan base has led to an unbelievable number of album releases through the years – some legitimate and some not – that have seemingly shown Iggy, both solo and with the Stooges, in just about every light. There seems to be no end to Iggymania, though, as this release from England’s Snapper Music illustrates. Your Pretty Face Is Going to Hell is another retelling of the Stooges’ legend, and not a half-bad one at that.

The material collected for Your Pretty Face Is Going to Hell is strictly from the archives, i.e. of interest primarily to collectors and not the casual fan of Iggy or the Stooges. Assorted studio outtakes, a few live tracks, and some demo tapes, some of this been released before on other albums, while other tracks have circulated in the tape trading and bootleg communities. Since this stuff was dug out of the vaults, apparently without much post-production added to the tracks, the sound quality varies wildly, from muddy studio tracks to bright, tinny radio broadcasts.

There are some good performances here, though, including a brilliant studio take of “Cock In My Pocket,” an over-the-edge version of “Open Up and Bleed,” and a wonderful rehearsal take of “Johanna.” A live radio broadcast of “Raw Power,” although of mediocre sound quality, nonetheless sounds great when you turn it up loud, while the bonus tracks, “Tight Pants” and “Scene of the Crime” are an eerie musical foreshadowing of the British punk that would follow, all muscle and bad attitude. Your Pretty Face Is Going to Hell may not win points for beauty or aesthetic quality, but for raw, primal rock ‘n’ roll energy and cheap thrills, it works pretty well. (Snapper Music, 1998)

Buy the CD from Amazon.com: Iggy & the Stooges’ Your Pretty Face Is Going to Hell