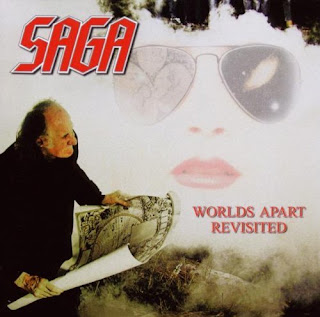 There are “musical legends,” and there are bona fide “Musical Legends,” and it would suffice to say that Saga falls into the latter category. While punk was being rediscovered and the “Class of ‘77” anointed in England, Saga was forming in Toronto, part of the late ‘70s prog-rock movement in Canada that spawned bands like Rush and Triumph. Saga fit into the same mold, albeit with slightly more of a pop edge.

The band released its self-titled debut album in 1978, toured constantly, and subsequently cranked out a new album every eighteen months or so through the end of the ‘80s; thirty years after forming, the band still creates vital, spellbinding music. Among the some 20 albums in its extensive discography, Saga has continued to show enormous growth in artistic vision and technical proficiency as a band, making them one of the most respected and popular of the second wave of prog bands with hardcore fans.


In 1981 Saga released its major label debut, Worlds Apart, just in time to take advantage of a music revolution partially fueled by the creation of MTV. The album showcased an infectious prog-pop sound that was influenced by Genesis and Gentle Giant, but also displaying a great deal of originality. Beating the subsequent wave of similar-sounding, but geographically-named bands like Asia and Europe by a good year or two, Worlds Apart yielded an AOR-radio hit in the song “On the Loose,” with its accompanying video among the first to be broadcast on the new music video network. Reaching a lofty number 29 on the Billboard pop chart, the album’s success would put Saga on firm footing during the new decade.

In December 2005, around Christmas, Saga appeared onstage in Prattein, Switzerland to perform Worlds Apart in its entirety, almost 25 years after its original release. The performance was recorded on both audio and video with an eye towards future release on CD and DVD, both of which have been delayed but should be released later this year. Since the Reverend was lucky enough to get his greedy little music-loving hands on an advance copy of the two-CD Worlds Apart Revisited set, let me tell you that if you’re a fan of pop-oriented prog and melodic rock, this Saga CD should be placed on your “want list” post-haste.

As stated above, Worlds Apart Revisited features a complete performance of the original album. With much of the same crew in tow from back in ’81 – the foursome of vocalist Michael Sadler, guitarist Ian Crichton, bassist Jim Crichton, and keyboardist Jim Gilmour have played together for better than a quarter-century – these songs sound much like they might have when Saga originally played them at the dawn of the ‘80s. The band’s famous guitar-keyboard interplay is still very much prominent in this performance, the chemistry between Crichton and Gilmour as incredible as that between Steve Howe and Rick Wakeman back in the glory days of Yes. The rest of the band remains equally impressive musically, while Sadler’s vocals are every bit as powerful today as they were when he first cranked up the pipes in 1977.

Alongside well-loved chestnuts like “On the Loose,” “Framed” and “Time’s Up” from Worlds Apart, this two-disc set includes an abundance of vintage material from the band’s first three albums – “Ice Nine,” “How Long” and “Humble Stance” from 1978’s Saga, “See Them Smile” and “You’re Not Alone” from 1979’s Images At Twilight and “Careful Where You Step” from 1980’s Silent Knight; as well as “Scratching the Surface” and “The Pitchman” from Heads Or Tales, the 1983 follow-up to the band’s commercial breakthrough. There’s also a bit of more contemporary material to be found among the 22-songs on Worlds Apart Revisited, including “Keep It Reel” from 2005’s excellent Network and “The Runaway” from 2001’s House of Cards. All of the performances can boast of Saga’s legendary instrumental prowess and progressive musical arrangements.


Prog-rock is still painfully disrespected in the United States, no band so much as Saga. Representing, perhaps, the last of the ‘70s-era progressive bands, Saga has survived numerous musical “revolutions” – from punk and new wave to nu-metal and grunge – with its sound and dignity intact. The band has retained a loyal following for three decades, both in the states and in Europe and Asia, by playing well and staying true to their original vision. Worlds Apart Revisited is a testament to both Saga’s longevity and dedication to their craft. (Inside Out Music, released 2007)