Archive Review: The Clash’s From Here To Eternity Live (1999) 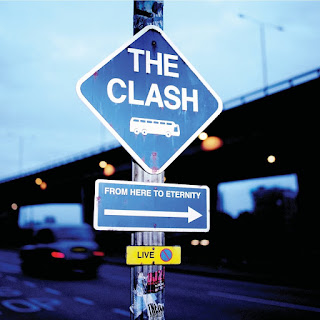 They were called the only band that mattered, and for a short while that was true. The Clash came roaring out of England’s punk scene like a saber-rattling golem with a pint of ale and a union card. They were punk personified, spitting in the face of authority while not afraid to sharpen their lyrical edge on subjects like the British government, pop culture and consumerism in the USA, Nicaraguan freedom fighters or nuclear Armageddon. They were loud, obnoxious, political and self-righteous and they played gut-level rock n’ roll like nobody else before or since.

From Here To Eternity Live is a long overdue document of the Clash in their natural environment: onstage. Although this humble critic would have preferred a disc (or two) derived from a single show, the myriad performances captured by From Here To Eternity Live will have to suffice (alongside a couple of choice bootlegs, of course). Taken from eight shows that range chronologically from 1978 through 1982, with half from that 1982 tour, the sixteen songs on From Here To Eternity Live nonetheless manages to capture the fire and passion that the Clash brought to their live shows. The same power and honesty that made the Clash legends in their own time still earns the band fans better than a decade and a half after the band’s demise.

It would be hard to pin down which performances are the best here, since fans have been circulating tapes of many of these shows for years while many have also been available as bootlegs. I’m personally partial to the early version of the Clash with Topper Headon on drums, represented here by red-hot and electrifying renditions of “London’s Burning,” “I Fought the Law” and “Guns of Brixton” among other songs. Some of the tour of ‘82 stuff ain’t half-bad, though, with vintage ravers like “Clash City Rockers” and “Career Opportunities” or the band’s biggest hit “Should I Stay Or Should I Go” receiving appropriately rocking live renderings. Perhaps if From Here To Eternity Live sells in sufficient quantities, the folks at Epic/Sony will release some complete performances on disc for those of us who wouldn’t mind supplementing our bootleg vinyl/CD versions with legitimate releases.

From Here To Eternity Live includes a number of pictures of the band and several pages of quotes from fans and fellow rockers. The band’s legacy as a live band is best summed up here by a quote from a fan named Daniel who states “I am only 18. I have never seen the Clash but I would sell my grandmother to have seen them.” No better words could describe the only band that still matters…the Clash. (Epic Records, released October 26, 1999)

Buy the CD from Amazon.com: The Clash’s From Here To Eternity Live
Posted by Rev. Keith A. Gordon at Friday, June 19, 2020