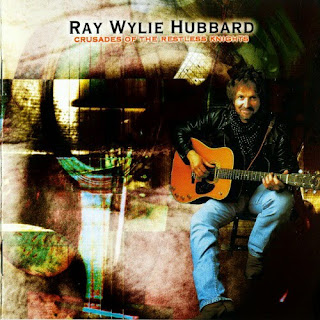 There’s no room for grizzled old poets in Nashville, just pretty boys in tight jeans and cowboy hats, vacant stares not at all concealing blank slates. Ray Wylie Hubbard, on the other hand, looks like an old book; his face lined with experience, his songs vivid pages illustrated with great craftsmanship, tales sharing the beauty of life in all of its ups and downs. Crusades of the Restless Knights is the kind of album that only a survivor could make, somebody with a few miles under their belt, more than a few scars on both their bodies and their souls and the musical vocabulary to share it with the listener.


A long-time fixture on a Texas music scene that includes fellow talents like Guy Clark, Jerry Jeff Walker, and the late Townes Van Zandt, Ray Wylie Hubbard is best known, perhaps, for his wild reckless ways and unshakeable status as one of the founders of the 1970s-era “Cosmic Cowboy” scene. In his heart, however, Hubbard is a folk singer and, at its root, Crusades of the Restless Knights is a spiritual journey both lyrically and musically. In songs peopled with angels and demons, saints and criminals, star-crossed lovers and broken heroes, Hubbard has created a not-so-gentile Faulkner South, weaving wonderful stories from the fabric of his experience and insightful observations.

Many of the tales on Crusades of the Restless Knights, songs like “This River Runs Red” concern themselves with the choices people make in this life, offering a world where you’re either saved or a sinner and there’s a fine line between the two. “There Are Some Ways” is as much about the pain of growing older as it is about the regrets of no longer being young. Hubbard is not an altogether somber wordsmith, however, as proven by the side-splitting, knee-slapping religious commentary of “Conversation With the Devil.” A classic talking blues with acoustic accompaniment that was inspired by an actual dream, the song cleverly tars abusive parents, right-wing Christians, and Nashville record execs with the brush of damnation. The song revisits the fiddle contest in Charlie Daniels’ classic “Devil Went Down To Georgia” before closing with the inspired lines “some get spiritual cause they see the light/and some cause they feel the heat.”

Aside from its underlying themes of hope and redemption, Crusades of the Restless Knights also honors those who have already gone to their judgement. “Airplane Fell Down In Dixie” pays homage to the fallen members of Southern rock legends Lynyrd Skynyrd while “The Messenger,” from an earlier Hubbard album, is amended here as a tribute to fellow Texan Townes Van Zandt, with beautiful backing vocals from Patty Griffin. Echoing, perhaps, Hubbard’s own artistic redemption, “The Messenger” closes the album with the ultimate statement of hope: “I just want to see what’s next.”


Filled with vivid imagery, masterfully painted characters and intelligent, literary lyrics, Crusades of the Restless Knights is everything a country album should be, Hubbard the kind of artist that Nashville labels should be signing. Too raw, too honest and too talented for “Music Row,” Hubbard remains a country outsider creating art that rises above commerce, music that looks to the future while paying heavy dues to the ghosts of the past. One of the year’s best efforts and a timeless collection of songs, I’d heartily recommend Crusades of the Restless Knights to any music lover who values craft and skill above style and trends. (Rounder Records, released July 20, 1999)

Buy the CD from Amazon.com: Ray Wylie Hubbard’s Crusades of the Restless Knights
Posted by Rev. Keith A. Gordon at Friday, June 26, 2020