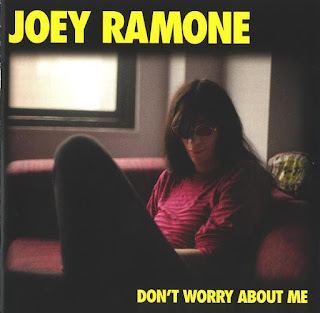 After the 1996 break-up of punk icons the Ramones, the band’s frontman and teen idol Joey Ramone worked sporadically on a solo album for several years. Uncompleted at the time of his death last Easter from cancer, Ramone’s long-awaited solo bow has been wrapped-up by producer, guitarist and long-time compatriot Daniel Rey, and is being released in time for the Ramones’ induction to the Rock & Roll Hall of Fame in March. Ironically titled Don’t Worry About Me, the album is a fitting tribute to an enormous talent.

With a band that includes Rey, the Dictators’ Andy Shernoff, Frankie Funaro of the Del Lords and former bandmate Marky Ramone, Joey has delivered the perfect pop masterpiece that he’s wanted to create his entire career. The album opens with a strong affirmation of life over death, Ramone masterfully providing the Louis Armstrong classic “What A Wonderful World” with new meaning and power. From the funny schoolboy crush of “Maria Bartiromo” to an inspired cover of the Stooges’ “1969,” Don’t Worry About Me offers up the same sort of bubblegum punk and hard rock that was the trademark of Ramones’ former band. Joey’s imperfect vocals remain infectiously friendly, his simple lyrics concealing the depth of thought behind them.

Joey speaks openly of his disease only once, with “I Got Knocked Down (But I’ll Get Up),” a powerful song of defiance and hope. The album closes with the title track, fittingly an old-fashioned love song. In his heart, Joey was always a mark for pop music, a rabid record collector with a fondness for bubblegum pop and sixties garage rock. With Don’t Worry About Me, Ramone reaffirms his love for the music that gave his life meaning. Joey brings the same sort of passion and fire to this wonderful collection of songs that he did to that first Ramones album better than twenty-five years ago. Joey Ramone leaves a magnificent recorded legacy, one that will continue to reach new fans when today’s hyper-marketed artists have fallen by the wayside. (Sanctuary Records, released 2002)

Buy the CD from Amazon.com: Joey Ramone’s Don't Worry About Me