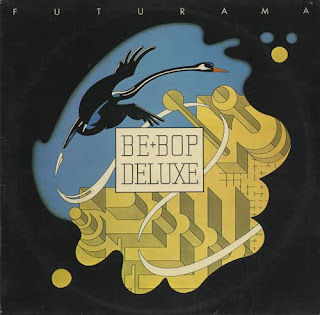 The bottles were all empty and the lights were being turned out by the time that Be-Bop Deluxe made their way to the early ‘70s British glam-rock party. The band released its critically-acclaimed debut album Axe Victim during the summer of 1974 and, while they had the musical chops and cool song titles like “Jet Silver and the Dolls of Venus,” “Night Creatures,” and “Rocket Cathedrals,” it had been a couple years since Bowie’s Ziggy Stardust masterwork, three since Marc Bolan’s T. Rex breakthrough Electric Warrior, and Mott the Hoople were on the verge of breaking up. Glam-rock had begun to assume room temperature…

Be-Bop Deluxe frontman Bill Nelson evidently agreed, as he booted the entire Axe Victim band, stripped Be-Bop down to a power trio with new guys Charlie Tumahai (bass) and Simon Fox (drums), and re-forged the trademark Be-Bop sound to a curious mix of shimmering fretwork; unusual song structure; and oblique lyrics that often had the band venturing, often dangerously, into proggy art-rock turf not dissimilar to what Queen was pursuing at the time. In my humble opinion, Be-Bop Deluxe did it better. Listening to “Maid In Heaven,” from the band’s sophomore effort Futurama, my mind goes back to first hearing the song on Nashville’s WKDF-FM radio during my senior year in high school. Nelson’s wiry, melodic leads are balanced by a rough, scraped guitar lick, the band’s masterful vocal harmonies, and the sort of fantastical lyrics that would appeal to an erudite 17-year-old rock geek.

Nelson didn’t stop with “Maid In Heaven,” which became a minor FM radio hit stateside, delivering a knockout punch with the mesmerizing “Sister Seagull.” Offering up some of the most exotic six-string pyrotechnics of the era, the song matches a lofty melody with hard-rocking rhythms that are guaranteed to take your head to places that only ‘shrooms or old-school LSD could travel…call it a “new psychedelia” for a modern age. Nelson’s stunning guitarplay would bring an otherworldly vibe to every song on Futurama, from the lush, radio-friendly “Music In Dreamland,” with its lofty pop echoes to the Spanish-flavored guitar strum of “Jean Cocteau” or the alluring cacophony of “Between the Worlds.” Little has been recorded to match Futurama for sheer reckless abandon, and fewer still are the songwriters who could match Nelson in vision and ambition.

Be-Bop Deluxe would enjoy a short, but impactful career – a mere five studio albums and a stellar live set – over a too-short four-year span circa 1974-78 before Nelson packed it in and launched a solo career that continues to this day and best expresses his restless musical ideas. Still, you can’t go wrong with any Be-Bop LP, and after Futurama, I’d heartily recommend Sunburst Finish and Modern Music, both of which display differing facets of Bill Nelson’s talents and wandering muse. (Harvest Records, 1975)