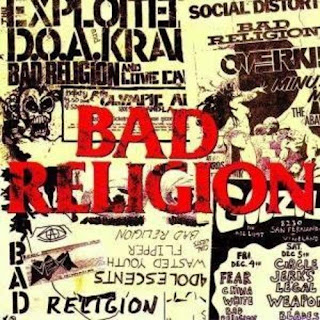 Contrary to the belief of many scribes, the recent punk rock revival hasn’t occurred overnight. Mainstream critics have all but ignored the punk underground, perhaps thinking that it would go away if they just wouldn’t write about it. The kids knew all along what time it was, jamming local all ages shows at clubs across the country to see bands like 7 Seconds, NoFX, Operation Ivy and, the grandpappy of them all, Bad Religion.

Formed during the early ‘80s American hardcore punk revolution, Bad Religion rapidly became SoCal faves with the release of their uncompromising debut, How Could Hell Be Any Worse? As the hardcore movement began to lose steam come mid-decade, mutating into a dozen varied musical forms, the band split into separate factions and stayed out of the game for almost four years. In 1988, the original five members of Bad Religion reunited to release the ground-breaking Suffer, and a revitalized punk scene was born that would carry over to the present day.

Over the next few years, Bad Religion would rewrite the book on punk rock. The band had developed a driving, furious rock style that combined the attitude and energy of punk with musical elements drawn from almost 40 years of rock ‘n’ roll. Intelligent lyrics, often espousing a certain socially-conscious world view, were contributed by vocalist Greg Graffin and guitarist Brett Gurewitz. Released through Gurewitz’s Epitaph Records label, albums like No Control, Against the Grain, and Generator captured the hearts and imaginations of young fans, each selling upwards of a hundred thousand copies – unheard of, at that time, for a punk band on an indie label.

All Ages culls material from the aforementioned late ‘80s/early ‘90s releases, as well as a pair of previously unreleased live cuts and a taste from their 1981 debut, “We’re Only Gonna Die.” All Ages is a significant overview of the band’s work during this important time period, presenting the band’s talents through cuts like “You Are (The Government),” “No Control,” “Fuck Armageddon...This Is Hell” and “21st Century Digital Boy.” Twenty-two cuts in all are included, each one going a long way towards explaining the band’s popularity and influence. This stuff is whip smart punk rock: no frills, cranked out fast and furious with style and intelligence.

Covering as it does, Bad Religion’s 1988-1994 pre-Atlantic label years, All Ages serves as an excellent document of the band’s achievements to this point, showcasing a considerable musical growth and their maturity into one of rock’s best bands. Along with the previously-released, self-explanatory 80-85, the appropriately-titled All Ages is an excellent compilation for fans of the band as well as an important touchstone in the band’s career. With the major-label release of Recipe For Hate, Bad Religion began writing the next chapter in their story, and only time will tell the story. (Epitaph Records, released 1995)

Buy the vinyl from Amazon.com: Bad Religion’s All Ages