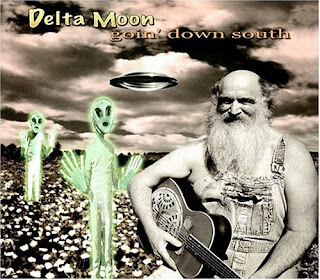 If only for the classic song “Money Changes Everything” – covered so completely by Cyndi Lauper – former Brains keyboardist and songwriter Tom Gray deserves induction in somebody’s hall of fame. Unfortunately, by the time of that song’s enormous success, the underrated band had disbanded and Gray moved from Atlanta to Nashville to pursue a full-time songwriting career. He must have discovered that Nashville isn’t the sort of creative mistress to nurture a gifted wordsmith, as Gray returned to Atlanta and ended up forming the acoustic roots band Delta Moon with neighbors Gina Leigh on vocals and guitarist Mark Johnson in the early ‘90s. Gray’s infatuation with traditional blues and roots-rock began to gain the band a following, the threesome subsequently adding noted blues bassist Jon Schwenke and drummer Scott Callison.

Goin’ Down South is Delta Moon’s third album and second studio effort, the record illustrating the impressive musical chemistry between the players as well as the band’s firm creative grasp on a wide range of material. An entertaining mix of rootsy originals and inspired covers, including Mississippi bluesman J.B. Lenoir’s “I Want To Go” and hill country legend R.L. Burnside’s “Goin’ Down South,” the album is an intricate mix of Delta blues, Southern-fried country funk, and roots-rock. Gina Leigh is a gifted vocalist, belting out the bluesier numbers with passion and finesse while Gray’s gruffer vocals are better suited for the more subdued and countryish material.

It’s the songs that make or break an album, though, and Delta Moon’s carefully considered material stands tall. “Poplar Grove” is a disturbing tale of rural vengeance, Gray’s mournful vocals complimented by his pedal steel playing and Mark Johnson’s nimble fretwork. “Stone Cold Man” is a swamp-flavored blues track featuring Leigh’s amazing pipes, the band delivering a funky groove behind the vocals. The unusual choice of the David Bowie/Iggy Pop tune “Nightclubbing” to cover is a risky move pulled off with skill by Delta Moon, the band interpreting the Teutonic cabaret of the original as a smoky blues shuffle. “Shake Something Loose,” written by Gray with fellow traveler Randall Bramblett, is a rocking number that bubbles over just short of rowdy.

Delta Moon has attracted a lot of attention from the blues/roots music segment of the industry, but based on the strength of Goin’ Down South, I’d say that they could just as easily appeal to the jam band audience as well. The band has two skilled multi-instrumentalists in Gray and Johnson; Schwenke and Callison are a solid and flexible rhythm section; and between Leigh and Gray, Delta Moon’s vocalists can pull off a diverse range of material. Delta Moon may not meander off into twenty-minute extended jams (tho’ I believe that they could), but they evince the sort of rural southern “down-home” innocence and instrumental skills that have made bands as disparate as moe, Phish, and Bela Fleck and the Flecktones favorites on the festival circuit. Don’t believe me? Check out Goin’ Down South…it’s all in the grooves. (Deep Rush Records, released June 15, 2004)

Buy the CD from Amazon.com: Delta Moon’s Goin’ Down South