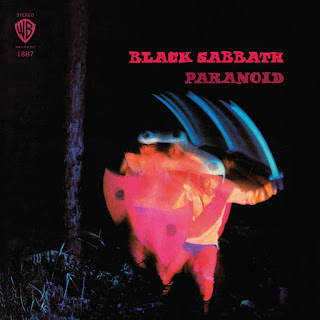 If Black Sabbath’s self-titled debut album, released in February 1970, was a shot across the bow of music biz politesse, then their sophomore effort, Paranoid, tore down the gates and announced that the freebooters were here to rampage and plunder. Released a mere seven months after their debut, the album represented a large creative leap forward for the foursome of Ozzy Osbourne (vocals), Tony Iommi (guitar), Geezer Butler (bass), and Bill Ward (drums). The touchstone for several subsequent sub-genres of heavy metal – as well as a foundational album for the metal genre altogether – there’s literally not a bad song to be found on Paranoid.

Kicking off with the anti-war dirge “War Pigs,” Iommi introduces his heavy, riff-based guitar technique to a legion of stoners while Ozzy’s sepulchre vocals perfectly match the Sturm und Drang of Butler’s lyrics. Producer Roger Bain added some sound effects to the mix while Ward’s explosive drumbeats drive the song’s lyrical narrative. The result ranks among the top two or three most influential metal songs ever recorded. The breakneck title song – literally thrown together in the studio at the last minute to pad out the album – shows the band channeling arcane forces with a thrashy descent into madness that would make “Paranoid” perhaps the most influential heavy metal track of all time (or only second, perhaps, to Deep Purple’s “Smoke On the Water”). Sabbath wasn’t content with merely resting on the success of the first couple of ball-breakers on Paranoid, nosirree…they go on to dredge up the most devastating sonic sludge that they could conceive of in the proto-metal daze of the dawn of the new decade.

The hallucinogenic psychedelic mindfuck of “Planet Caravan” is directly responsible for the creation of bands like Saint Vitus, Kyuss, the Obsessed, and Electric Wizard while the plodding, metal-clad golem “Iron Man” has taken on legs of its own beyond Paranoid. Songs like “Electric Funeral” and “Hand of Doom” display a heretofore unknown, uranium-strength level of heaviness and radioactivity while the album-closing “Fairies Wear Boots” (with its intricate musical intro often listed separately as “Jack the Stripper”) cranked the amps to absurd levels, Ozzy’s epochal vocals matched by jackhammer rhythms and Iommi’s six-string pyrotechnics. A new wind was blowing in from Merry Olde England, driving Paranoid to #1 in the U.K. and #12 on the U.S. albums chart, eventually selling more than four million flapjacks on its way to making Sabbath international rock stars. (Warner Brothers Records, 1970)