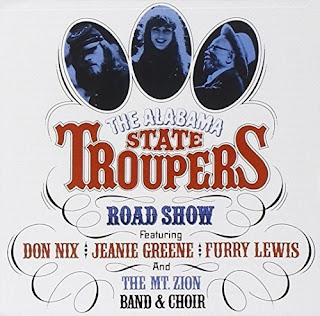 Memphis music legend Don Nix made his bones as part of the Stax Records family tree. He wrote the blues standard “Going Down” which, although originally recorded by hometown boys Moloch, would find fortune in the hands of artists like Freddie King and Stevie Ray Vaughan. Nix hung around with talents like Leon Russell, Eric Clapton, and George Harrison and produced albums by folks like John Mayall and Albert King, so Elektra Records thought they had a hot property when they signed the Southern singer, songwriter, and producer.

When Nix’s label debut, 1971’s Living By the Days, failed to chart, however, Elektra started looking for another angle to break the artist. I’m not sure who came up with the “road show” concept (the CD reissue liner notes credit the label’s Nashville A&R director Russ Miller), but Nix jumped into the project enthusiastically, assembling a touring band that included regional talents like guitarists Wayne Perkins and Tippy Armstrong, pianist Clayton Ivey, and the “Mt. Zion Choir,” which included backing singers Brenda Patterson and Marlin Greene. The tour was designed to showcase Elektra label artists Nix, Jeanie Greene, and Lonnie Mack but, when Mack backed out at the last minute, Nix wisely recruited Memphis bluesman Furry Lewis to take his place.

As shown by the Alabama State Troupers’ Roadshow – a two-LP set pieced together from a pair of October 1971 shows in California – Nix’s inspired blending of Southern rock, blues, soul, and gospel music was decades ahead of its time (we call it ‘Americana’ these days). Lewis is provided the entire first side of the vinyl to spin his mesmerizing country-blues yarns, and those lucky bastards who paid $1.50 a ticket for the shows soaked in dynamic performances of gospel songs like “Jesus On the Mainline” and “Mighty Time” alongside furious rockers like “Asphalt Outlaw Hero,” “Olena” and, of course, “Going Down.” It’s an album entirely of its time, a timeless amalgam of American music that has only grown in appreciation since its release. (Elektra Records, 1972)