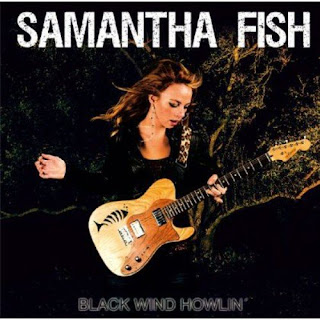 Guitarist Samantha Fish is a real up ‘n’ comer on the worldwide blues stage, a relative newcomer that nevertheless has a wealth of experience to her credit along with some globetrotting tours and a pair of albums with fellow distaff bluesers Cassie Taylor and Dani Wilde as “Girls With Guitars.” Fish released her Blues Music Award winning solo debut Runaway in 2011 and now, a couple years later, comes the all-important sophomore effort, Black Wind Howlin’.

There’s so much that’s good about Black Wind Howlin’ that it’s hard to find a place to start the praise. “Miles To Go” is a hard-rockin’ blues tune that veers dangerously close to metal turf (think Motorhead’s “Ace of Spades”), the song’s unrelenting rhythm, restless “life on the road” lyrics, and scorched earth fretwork making for an invigorating listen. By contrast, “Kick Around” could make Fish a lot of money in song-starved Nashville, the tune a near-perfect mix of blues roots, roots-rock, and twangy guitar courtesy of Mr. Zito while “Go To Hell,” written with Zito, features a monster stomp ‘n’ stammer rhythm, big drumbeats, Fish’s malevolent guitar, and guest Paul Thorn’s delightfully gravel-throated vox.

Sansone shines on “Sucker Born,” his wildfire harp offering a nice counterpoint to Fish’s smoldering vocals and stunning guitarplay and a cover of Howlin’ Wolf’s “Who’s Been Talking” is delivered throwback style, with sultry vocals and swinging guitar and harmonica creating a dangerous vibe. Fish is a fine lyricist, imaginative and inventive while still learning the ropes, but it’s her amazing six-string skills that will enchant and hypnotize the listener. Don’t let her youth and gender fool you…Samantha Fish is genuinely bad to the bone, and only getting better! Grade: A (Ruf Records, released September 10, 2013)