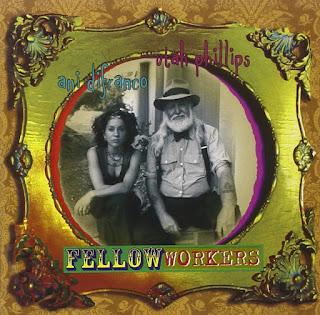 Ani DiFranco has made a good living by defying expectations and laughing in the face of conventional wisdom. When the major labels ignored her unique brand of punk-folk, she started her own label – Righteous Babe Records – and made it a great success. When the big boys finally came sniffing around, sensing that a buck or two could be made off DiFranco’s seemingly unlimited talent, she turned her back to the multinationals – hell, she didn’t need them as bad as they needed the artistic credibility she could provide. And when DiFranco made the decision to add an artist to her label’s exclusive roster, she didn’t go looking for some hot indie band, but rather developed a project with folk singer and political activist Utah Phillips.

Fellow Workers, the second collaboration between DiFranco and Phillips, is a wonderfully subversive collection of both original and traditional stories and songs with a sharp political edge. Phillips, an old school Industrial Workers of the World union member or “wobblie,” relates tales of the extraordinary feats of average people who propelled worker’s rights forward through activism, strikes and their own sacrifices. The forty-hour week, the eight-hour day, annual vacations, worker safety and many other rights that we currently enjoy can all be directly tied to the defiance of union members and “fellow workers” during the early part of this century.

DiFranco and her crackerjack band create an ever-moving musical undercurrent beneath Phillip’s storytelling, mixing musical genres from acoustic folk to organic ambience in support of the grizzled Phillip’s friendly vocals. Touching upon some of the labor movement’s most beloved figures, such as Mary “Mother Jones” Harris, as well as rank-and-file folks like Tom Scribener, the saw-playing musician, Phillips bring these folk heroes to life with his energetic sharing of these important stories.

A thought-provoking and valuable collection, Fellow Workers shows that, contrary to what the corporate media might say, there’s still a little life left in the struggle yet. Progressive politics doesn’t have to consist of boring intellectualism or corrupt unionism but can be lively, joyous and accessible. The songs and stories on Fellow Workers are about hope and the desire for a better world that includes us all, regardless of race or creed or how much money one has in the bank. With this collaborative effort, DiFranco and Phillips keep this hope alive. (Righteous Babe Records, released May 18, 1999)