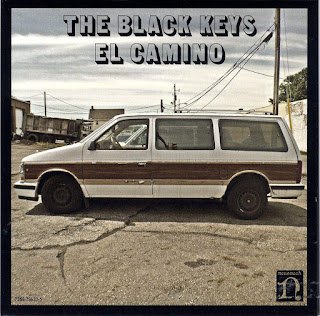 The Black Keys found unexpected success with their 2010 breakthrough album Brothers, which earned the duo of Dan Auerbach and Patrick Carney three Grammy® Awards. While Brothers’ mix of psychedelic-tinged blues, rock, and soul music struck a chord with listeners, the album’s hit single, the groove-fattened “Tighten Up,” became ubiquitous, blasting from TV sets and radios across the fruited plains.

The Black Keys have delivered a fast follow-up to Brothers in the form of El Camino, a solid collection that draws upon its predecessor’s timeless mix of styles with a pure-at-heart blast of retro-soul and rock ‘n’ roll. Unlike the band’s previous collaboration with producer Danger Mouse, 2008’s Attack & Release, which experimented in lofty sonic atmospherics, there are no loose musical threads here. Instead, El Camino hits fast-and-hard with inspiration that spans the decades, the Black Keys turbo-charging their trademark garage-blues sound with elements of soul, electric funk, and punch-drunk throwback rock ‘n’ roll.

El Camino cranks from the jump with lead single “Lonely Boy,” which sports a riff-happy melodic hook every bit as large and in charge as that on “Tighten Up.” Auerbach’s slightly-echoed vocals are overwhelmed by the song’s dangerously infectious sing-along chorus and Carney’s propulsive drumbeats. Infusing a bedrock of rock ‘n’ soul with a maddeningly effective recurring riff and plenty of engaging “whoa whoa whoa,” the song will stick in your brain long after you’ve heard it, like some funky brain chigger.

You’ll find no creative drop-off from the radio-friendly peaks of “Lonely Boy,” El Camino rolling through its eleven songs in a shockingly efficient 38-minutes, leaving the listener gasping for breath and wanting another taste. The martial rhythms of “Dead and Gone” belie the song’s melodic R&B heartbeat, while “Little Black Submarines” is a Zeppelin-styled folk-rock ballad with melancholy vocals and elegant, atmospheric fretwork. “Money Maker” is a raucous blues-rock stomp with muscular rhythms while “Nova Baby” revisits the retro-soul vibe of the opening track with a gorgeously melody and sticky chorus.

The Black Keys have come a long way from their three-chord garage-blues origins as an ersatz Rust Belt White Stripes doppelganger, finding their own voice in a high-octane blend of styles that is as classic as it is contemporary. (Nonesuch Records, released October 12, 2011)

Buy the CD from Amazon.com: The Black Keys’ El Camino