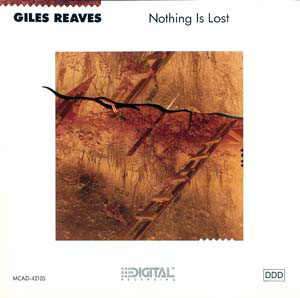 It may surprise you, but Nashville is rapidly gaining a reputation as a hotbed of “space music,” that ethereal art form which includes a myriad of musical styles and genres, consisting mostly of instrumental pieces and including everything from experimental jazz and esoteric classical works to aggressive noise and electronic wizardry. Creative and innovative musicians such as Anthony Rian, Kirby Shelstad, and William Linton have put the Music City on the “New Age” music map. The best-known of all our local creators is Giles Reaves.

Reaves, known locally for his engineering skills while associated with the Castle Studio, released his first collection of space music a year ago, the brilliant and effervescent album Wunjo. Inspired by the clairvoyant Nordic runes and performed on keyboards and synthesizers with the aid of a computer, Wunjo was a highly-textured and forceful work, and it captured the attention and imagination of listeners all over the globe.

Giles Reaves’ Nothing Is Lost

As wonderful as his previous album was, Reaves’ latest, Nothing Is Lost, is a more realized work. Exploring a different reality than that on his first recording, Reaves’ new album is a masterful and introspective creation, a rare combination of artistic vision and technical proficiency. Blending traditional instrumentation with synthesizers and a computer, Reaves has created a fully-developed, cohesive collection of pieces.

Nothing Is Lost draws from a more diverse sphere of influences and inspiration than Wunjo. An Asian feel pervades side one, incorporating the rhythms and syncopations of the islands to create a textured veil of sound and sensory appeal not unlike the lesser-known works of Brian Eno or the magnificent, Malaysian-influenced dreamworks of Jon Hassell. The second side of Nothing Is Lost is equally enjoyable, more fragile and mystically-oriented than the first side.

Reaves deserves any success or accolade heaped upon him and I, for one, hope that he continues to follow this particular music in creating further works of this nature. Space music composers are often ridiculed and patronized by lesser talents in other fields as mere panderers of spiritual Muzak. But, at their best, they are our generation’s equivalent to the classical composers of centuries past. Nothing Is Lost is no mere New Age snooze Muzak, but an intelligent and demanding work of art. It deserves to be listened to, judged, and appreciated on these lofty terms of sophistication. It requires nothing less. (MCA Masters Series, released 1988)

Review originally published by The Metro, 1988