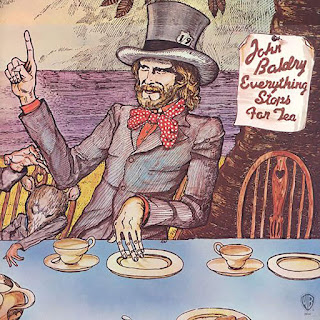 Following up on the modest success of 1971’s It Ain’t Easy album, which spawned a chart-scraping minor AOR radio hit in “Don’t Try To Lay No Boogie Woogie On the King of Rock & Roll,” British blues-rock icon Long John Baldry went back to the same well for his 1972 album Everything Stops For Tea. While the previous year’s effort represented a return to the blues for Baldry, who had enjoyed a string of pop ballads in the U.K. during the late 1960s, Everything Stops For Tea reached further back into the singer’s history, incorporating elements of British folk and R&B alongside Baldry’s usual mix of blues and rock music.

Baldry again enlisted the help of long-time friends and former bandmates Rod Stewart and Elton John to produce the new album. The first time around, Stewart’s productions were featured on side one of the original vinyl LP release, while John’s work was featured on side two. With Everything Stops For Tea, however, John’s production shines clearly on the first side, while Stewart’s seemingly rushed efforts hold down side two. Whereas on the first album, the best performances spanned the entire disc, here the highlights mostly come from John’s side, which offers up an inspired mix of material. Like with the previous album, an all-star cast of musicians was used, John utilizing his road-tested touring band, including guitarist Davey Johnstone, while Stewart used friends and former bandmates like the underrated guitarist Sam Mitchell, and Jeff Beck Group drummer Mickey Waller.

One of John’s most inspired song choices for the album can be found in the New Orleans classic “Iko Iko,” which Baldry delivers with reckless aplomb. The performance starts out low and slow, just Ray Cooper’s syncopated percussion and Baldry’s quiet vocals, before the volume and the temperature rises and the singer starts jumping ‘n’ jiving above a soundtrack that features Johnstone’s banjo and Olssen’s lively drumbeats. Altogether, they capture the sound and spirit of New Orleans R&B in a little recording studio in London. “Jubilee Cloud” is the last of the five John-produced tracks, the song a rollicking bit of blues-rock with folkish undertones driven by Ian Armit’s honky-tonk piano and a solid Voorman/Olssen rhythmic backbone. Baldry delivers a strong, Southern soul styled vocal performance while Cooper throws in a bit of chaotic percussion.

You Can’t Judge A Book By The Cover

The Stewart side opens with the comedic title track, itself introduced by an odd, entirely British spoken word bit before rolling into Baldry’s old-school crooning. It sounds a little strange to American ears, but I’m sure the U.K. audience adored it at the time. Not to be outdone by his colleague John, Stewart throws in his own Willie Dixon song, the boogie-woogie favorite “You Can’t Judge A Book (By the Cover),” originally a hit for the great Bo Diddley. Baldry does the song right, knocking out an energetic performance with improvised lyrical asides, backed by Armit’s manic piano-pounding and part-time Fleetwood Mac guitarist Bob Weston’s serpentine fretwork. The other highlight of side two is Baldry’s take on the traditional British folk tune “Mother Ain’t Dead,” which features a sublime performance by the singer on guitar, accompanied only by Stewart on banjo and backing vocals.

This CD reissue includes a number of bonus tracks, including two radio spots produced by Warner Brothers to originally advertise the album. More interesting is a live performance of Baldry’s original “Bring My Baby Back To Me” from the 1972 Mar-Y-Sol Festival in Puerto Rico. An unabashed electric blues song with a suspiciously hypnotic circular guitar riff (think Hill Country and R.L. Burnside), Baldry channels his best Howlin’ Wolf Delta blues growl above the scorching fretwork and swaggering drumbeats. A haunting cover of Neil Young’s melancholy “Only Love Can Break Your Heart” (mistakenly credited to Leadbelly?) features singer Joyce Everson, as does the folk-blues rave-up “I’m Just A Rake & Ramblin’ Boy,” which features a beautiful duet between the two singers above Baldry’s nuanced acoustic guitar.

Less bluesy and spontaneous, perhaps, than It Ain’t Easy, the following year’s Everything Stops For Tea nevertheless has its moments. Baldry’s voice is in fine form, the backing musicians are definitely inspired, and Elton John’s production, in particular, is subtle yet confident. These two early 1970s albums, originally released by Warner Brothers Records, represent the cornerstone of Baldry’s immense musical legacy in England, and provided the singer with a modicum of commercial success and popularity in both the United States and Canada. Both albums are highly recommended for the curious who want a taste of this talented and admittedly eclectic artist. (Stony Plain Records, released April 24, 2012)

Buy the CD from Amazon.com: Long John Baldry’s Everything Stops For Tea