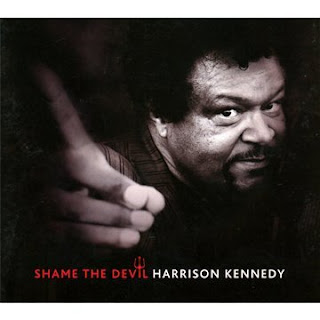 Singer, songwriter, and multi-instrumental talent Harrison Kennedy, a veteran of the 1960s and ‘70s Detroit soul scene – it was his voice on the 1970 Chairmen of the Board hit “Give Me Just A Little More Time” – launched his solo career in the mid-‘70s and hasn’t look backwards since, forging a unique sound from a mix of blues, rock, and soul music. Born and raised in Canada, Kennedy’s previous albums have earned the artist a handful of Juno Music Award nominations and other accolades, but he hasn’t yet managed to break through to the greater U.S. blues audience.

Maybe it’s time for us American blues fans to wake up, shake the wax from our ears, and discover what our friends to the north have known for quite some time now – Harrison Kennedy is a hell of a talent. His sixth album, Shame the Devil, is a complex and imaginative collection of mostly original material. The album’s lone cover is a reverent re-working of the Ray Charles classic “You Don’t Know Me” that leans closer to Charles’ soulful take than country legend Eddy Arnold’s original, with only Keith Lindsay’s lonely keyboards backing Harrison’s emotionally-charged vocals.

As for Harrison’s originals, the man is a natural storyteller and truth-bringer, his lyrics somewhat of a cross between Curtis Mayfield and Otis Taylor, championing the working class, the downtrodden, and the unfortunate. The Delta blues-styled “Trouble” could pass for early Son House, Harrison’s mournful vocals accompanied by a bit of solitary guitar and his fluid, tearful harp play. The haunting social commentary of “That’s Just Stupid” is bolstered by Harrison’s eerie banjo picking and Lindsay’s jarring wah-wah organ effect, while the mesmerizing “Musta Bin the Devil” channels Robert Johnson with deep, sonorous vocals and a driving acoustic soundtrack. The powerful “Hard Time Blues” is more than a mere country-blues throwback to the 1930s, Harrison’s strong vocals and locomotive harpwork matched by socially-conscious, prescient lyrics.

Harrison Kennedy’s Shame the Devil offers an entertaining and thought-provoking mix of contemporary and traditional blues music, masterfully delivered by a skilled songwriter and truly gifted musician that has flown under the radar for too long. (Electro-Fi Records, released September 4th, 2011)

Buy the CD from Amazon.com: Harrison Kennedy’s Shame the Devil