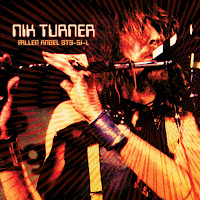 Turner's "Fallen Angel STS-51-L" will be released as a digital track available via iTunes on July 2nd, 2013 while a limited-edition 7" vinyl single (500 only) will be put up for sale on July 14th. Turner has created a spiffy new video for the song, incorporating footage from a recent performance at The Echoplex in Los Angeles, and it's every bit the trippy mind-fest that you'd expect from one of the pioneers of psychedelic space-rock.

Nik Turner was a founding member of U.K. sound terrorists Hawkwind, the singer and saxophonist an essential part of the band's commercial heyday, circa 1970-1976. Turner wrote and/or co-wrote some of the band's most popular tunes, including "Brainstorm," "Silver Machine," and "Master of the Universe" and appeared on such classic Hawkwind albums as In Search of Space, Doremi Fasol Latido, and Space Ritual. Apart from the band he helped make a legend, Turner has had a long and interesting career, working and recording with outfits like the Inner City Unit, Helios Creed, and his own band Sphinx among many others.

In a press release for the song, Turner says “this single is the epitome of epiphanic, orgasmic, cathartic embodiment of my space dreams, become one man's reality, exploding into space. Expect lots more on this awesome album.” After watching the video for "Fallen Angel STS-51-L" more times that should be legal to do so, the Reverend found the song to be white-hot molten slag that pours into your consciousness like honey oozing from the paws of a drunken bear. Check out the video (below) for yourself and see what you think…