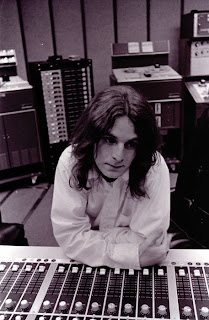 Alex Chilton fans – they are legion and are growing – have a lot to be happy about these days. For one thing, there's Nothing Can Hurt Me, the recent documentary covering Chilton's long-suffering cult band Big Star and the Memphis rock scene of the '70s. The critically-acclaimed film is accompanied by a briskly-selling soundtrack album that is earning Chilton, Chris Bell, Andy Hummel, and Jody Stephens new fans among a generation of hipsters too young to have enjoyed either Big Star's brief day in the sun or Chilton's often maddening solo career during the late 1970s and throughout the '80s.

On October 8th, 2013 Bar None Records will release Electricity by Candlelight, a previously unreleased live performance by Chilton that was fortunately caught on tape. The back story goes like this: Chilton and crew were performing at the Knitting Factory in New York City on February 13th, 1997 when the lights went out. Undeterred, Chilton borrowed an acoustic guitar from somebody and, accompanied by his drummer Richard Dworkin on half the songs, launched into an inspired solo set that was spontaneous, intimate, involved the audience, and featured songs not often performed by the singer/songwriter.

Because of the nature of the performance, Electricity by Candlelight offers up rare performances of songs Chilton seldom played before or after this single show, including some country tunes, a little Beach Boys, and some original material that seldom saw the light of day. A talented and often underrated musician, Chilton sadly passed away in 2010. His immense legacy lives on however, whether through his 1960s-era chart success with the Box Tops (Chilton sang the classic "The Letter" when he was just 16 years old), his cult status as Big Star frontman, or his eclectic solo career, all of which would influence bands like R.E.M. and the Replacements during the 1980s and '90s, an influence that reaches to today and a wealth of like-minded, pop-oriented rockers that can be glad that Chilton was there to blaze the trail.