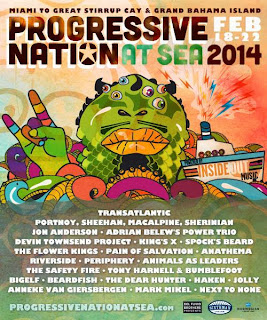 Back in 2008, Dream Theatre drummer Mike Portnoy dreamt up an idea of a sort of prog-rock "super tour" to bring the music to the masses. Thus was the Progressive Nation launched, and over the course of two North American and one European tour during 2008 and '09 – fronted by Dream Theatre and including three other bands hand-picked by Portnoy – the package tour showcased a variety of prog-minded bands.

After a five year hiatus, Progressive Nation is returning, this time on the high seas. The Progressive Nation At Sea will be a floating party featuring some of the best of brightest from the prog-rock and metal worlds. Launching from Miami, Florida and sailing to Great Stirrup Cay and Freeport, Bahamas, the Progressive Nation At Sea cruise will run from February 18th-22nd, 2014 on the Norwegian Pearl ship. The ocean-going festival will feature 40+ shows on multiple stages as well as jam sessions that are sure to get the big boat a rockin'!

The cruise ain't cheap – these things never are – but at $700 per person plus taxes and fees (say a grand total to be safe), you get the aforementioned entertainment, meals, and full run of the ship including an outdoor pool, hot tubs, a fitness center and more. The music is the main attraction, though, and comparing the cost of Progressive Nation At Sea with other cruises, it's a pretty good price for the entertainment value. Check out the Progressive Nation At Sea website for more info…