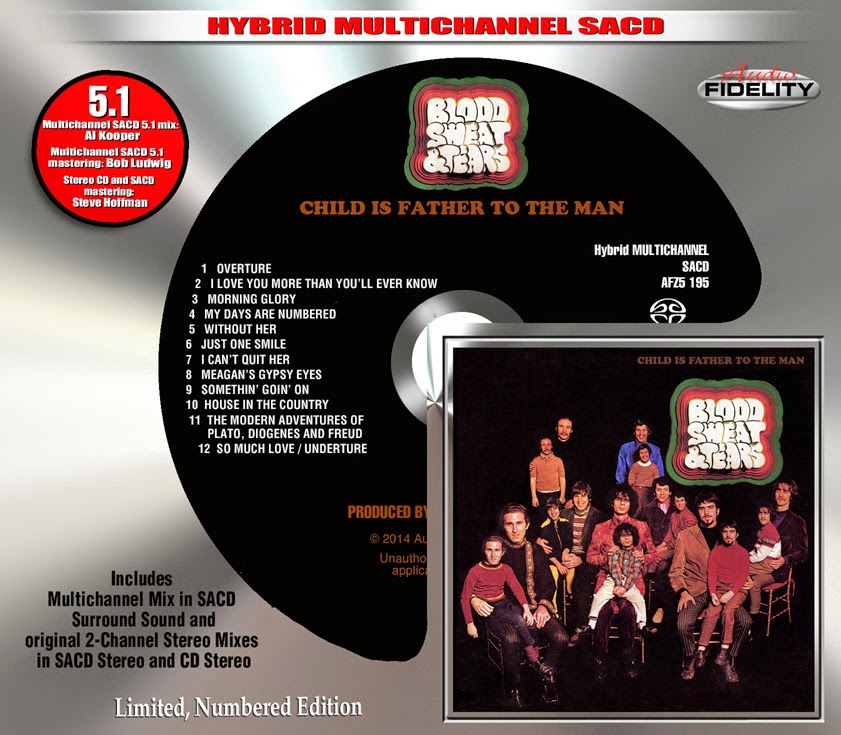 The pairing of rock ‘n’ roll legend Al Kooper and the good folks at Marshall Blonstein’s Audio Fidelity label has proven to be a creatively lucrative one so far, with the famed musician and producer re-vamping his classic Super Session album (with Michael Bloomfield) for the label with re-mastered 5.1 multichannel sound. Now Kooper digs into a project that has to bring up some painful memories, the debut album from Blood, Sweat & Tears – Child Is Father To The Man.

On November 11th, 2014 Audio Fidelity will release Child Is Father To The Man, the classic debut album by Blood, Sweat & Tears, as a hybrid SACD complete with 5.1 multichannel sound. The multichannel mix was produced by Kooper himself at The Magic Shop in New York City and mastered by Bob Ludwig. Since its release in 1968, Child Is Father To The Man has since become considered one of the most influential and important recordings of the era, Kooper’s brilliant mix of rock, soul, R&B and jazz styles as groundbreaking as it was entertaining.

Kooper had the idea for what would become Blood, Sweat & Tears in 1967 after having dabbled in a similar musical direction with his band Blues Project. Finding some like-minded musicians, including trumpeter Randy Brecker, guitarist Steve Katz (from Blues Project), bassist Jim Fielder, and drummer Bobby Columby, with Kooper himself on keyboards and vocals, the band recorded and released Child Is Father To The Man in 1968. The album featured a number of songs penned by Kooper – including the incredible blues ballad “I Love You More Than You’ll Ever Know” – as well as material by then obscure tunesmiths like Tim Buckley (“Morning Glory”), Harry Nilsson (“Without Her”), and Randy Newman (“Just One Smile”), among others.

Child Is Father To The Man rose as high as #47 on the Billboard albums chart, mostly on the strength of songs like the aforementioned “I Love You More Than You’ll Ever Know” and Kooper’s “I Can’t Quit Her.” If the album had been released a couple of years later, once FM broadcasting had gotten a foothold, the aforementioned tracks and others would have been radio staples. But the band’s revolutionary mix of styles and instruments, even in a pop setting, was too vigorous and strange for AM radio. The album’s meager commercial fortunes led to a mutiny, with Kooper forced out of the band he’d created, with Katz and Columby carrying on with a new singer and musical direction.

If the name Blood, Sweat & Tears reminds you of the worst commercial excesses of the early 1970s, you should know that the pre-David Clayton-Thomas version of the band as conceived by Al Kooper is a far different and creatively imaginative group. If you’ve dismissed BS&T on the basis of the band’s intelligence-challenged 1970s-era hits, you should check out Child Is Father To The Man to remind yourself of what true genius sounds like. Complete track list for the album below…

Buy the CD on Amazon.com: Blood, Sweat & Tears' Child Is Father To the Man (SACD)