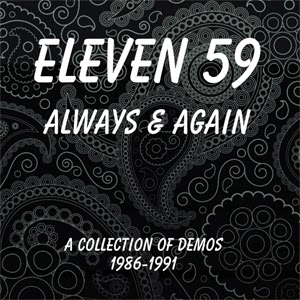 Eleven 59 was one of the more criminally-overlooked bands to emerge from the vital late 1980s/early ‘90s Nashville area rock scene. Formed by singer/songwriter David Hart and guitarist Brian Bickel, who had both immigrated to Murfreesboro to study the music business at Middle Tennessee State University, the pair was soon joined by bassist Dave Powers and former F-Particles drummer David Prince as Eleven 59’s initial line-up in 1986.

Over the course of the next seven years, and with a revolving door of bass players (including folks like Sean Harrison and Sam Powers), Eleven 59 toiled away in the trenches, touring the Southeastern club and frat circuit, released an EP (titled 7 Stories) on Nashville indie Carlyle Records and tried to score that elusive major label deal. Failing to get noticed, they disappeared into obscurity in 1993 like tens of thousands of other bands across the fruited plains.

The band’s story might have ended there, like it did for even hundreds of major label signees, leaving Eleven 59 as nothing but a fond memory in the minds of the band’s local fans. With the appearance of Always & Again, however, a twelve-track CD released by Hart and Bickel that compiles demo recordings by the band dating from 1986 to 1991, Eleven 59 proves themselves to have been a band out of time…if they’d formed a decade or so later, they might have been huge, because their music was/is forward-thinking, melodic, and utterly timeless with that charismatic edge that defines the best of rock ‘n’ roll.

Mixing punkish intensity with power-pop song structure and hard rock guitar, Eleven 59 culled the best from the musical world around them and created a magical bunch of songs that, if the major labels hadn’t been blinded by the events in Seattle circa 1991, they should have jumped on the band in a heartbeat. From a musical perspective, the band was both as tight and as sloppy as they needed to be; Hart’s vocals evinced an esoteric British lilt that evokes the Jesus & Mary Chain or even a newer outfit like Temples while Bickel’s fretwork both stings and slashes like the proverbial six-string razor.

While Prince is a classic big-beat drummer with busy hands and a bludgeoning sound, the band’s weak point was obviously on the other half of the rhythm section, as they revolved through five bass players over their seven years, and while some of them were good, none ever seemed to lock into Prince’s keen sense of rhythm to create something truly special. Nevertheless, the band had the chops to play in the big leagues and, listening closely to the demos on Always & Again, they had some find original material to offer as well. Although the sound quality here is definitely demo-quality, it’s not as harsh as it sounds, and one can easily imagine these songs taking on more texture and depth if they’d been recorded in a big studio with a skilled console wrangler to produce.

Still, there’s no shame in the material found on Always & Again. “Politics” is a defiant statement of purpose that displays a bit of insight into the music biz, Hart’s vocals soaring above a cacophony of screaming guitars and explosive rhythms. “Glass” is equally enchanting, Hart’s voice almost lost in a swirl of mesmerizing instrumentation, the chorus providing an infectious earwig while the song also showcases some of Bickel’s most innovative slash ‘n’ burn guitarplay. “Want To” was the popular song from the band’s 7 Stories EP, a surefire live crowd-pleaser with driving rhythms and menacing guitar licks that create an overall smothering ambiance not unlike Music City contemporaries Jet Black Factory.

By contrast, “California Song” offers a glossier surface that conceals the raging heartbeat throbbing below, Hart’s vocals taking on an edgier sound while the backing soundtrack is brilliantly constructed from intertwined guitars and slam-dancing drumbeats. “Goddess” opens with delightfully shimmering guitars before settling into a whisper/roar dynamic similar to Nirvana’s best work, while the title track is a rockin’ lil’ ditty replete with feedback-ridden jet-engine guitars, a fluid bass line, and rumbling drums that almost bury Hart’s rapid-fire reading of the lyrics. “Mythology” is a similar charmer, but with more of a metallic sheen courtesy of Bickel’s broken-glass guitar tones and imaginative playing.

Better late than never, perhaps, Always & Again provides the last word on one of Nashville’s truly unique and sadly unheard bands. Unlike some other Music City rock contenders who shall remain nameless – but who shamelessly had one eye on Los Angeles and what was going on in the late ‘80s era – Eleven 59 honestly and sincerely followed their own individual muse. The result is music that flows naturally, displays an evolutionary growth in sound and skill, and follows a unique vision instead of trailing musical trends.

Melodic instead of cynical, lyrically complex, and thoroughly entertaining, Eleven 59 could have been contenders. Thanks to the band’s belated release of Always & Again, they’ll be remembered as the trailblazers they truly were…

Great Songs. Great Band. Ahead of their time.

"Subjective review" Aren't all reviews subjective? That's what makes them a review. Sounds like a disgruntled bass player to me.