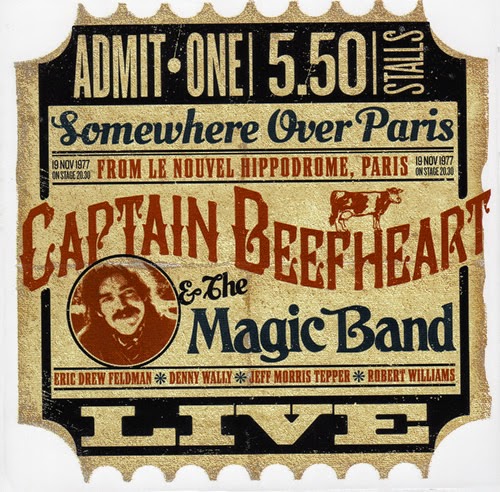 Back in May, the good folks at Gonzo Multimedia released a rare live recording by the legendary Captain Beefheart & the Magic Band, Live From Harpo’s 1980. Now the label is going for a second bite at the apple with the upcoming release of yet another rare Beefheart platter. On October 27th, 2014 (U.S.) Gonzo Multimedia will release Somewhere Over Paris, a two-disc set that captures a November 1977 performance at the Le Nouvel Hippodrome in Paris.

According to The Radar Station, a Beefheart fan site, this particular show was part of a festival at Sorbonne University organized by a French Trotskyist party, and was the only European performance by the band until 1980. Gong, Prime Time, and Buffy Saint Marie also performed at the festival. Performing songs from across its discography, including material from the troubled Bat Chain Puller (which wouldn’t be released in its original form until 2012), the Magic Band line-up for this show included guitarists Jeff Moris Tepper and Denny Walley, bassist/keyboardist Eric Drew Feldman, and drummer Robert Arthur Williams.

The Radar Station describes the sound of the album as “very good bootleg quality. Well balanced so you hear everything.” Indeed, this Paris show has seen infrequent release on CD as a European bootleg, but it’s nice to have a well-sourced legitimate release to document the band’s performance, of which Beefheart himself was particularly proud of, telling a reporter “the gig we played in Paris was monstrous. It was three days ago, but I haven't slept since – it was so good! And my voice, well, I can still feel that show in my voice. It hit me so hard I am down to three octaves...I couldn't get over the way the audience was singing along with it, singing the words back at me in English – and I don't speak a word of French.”