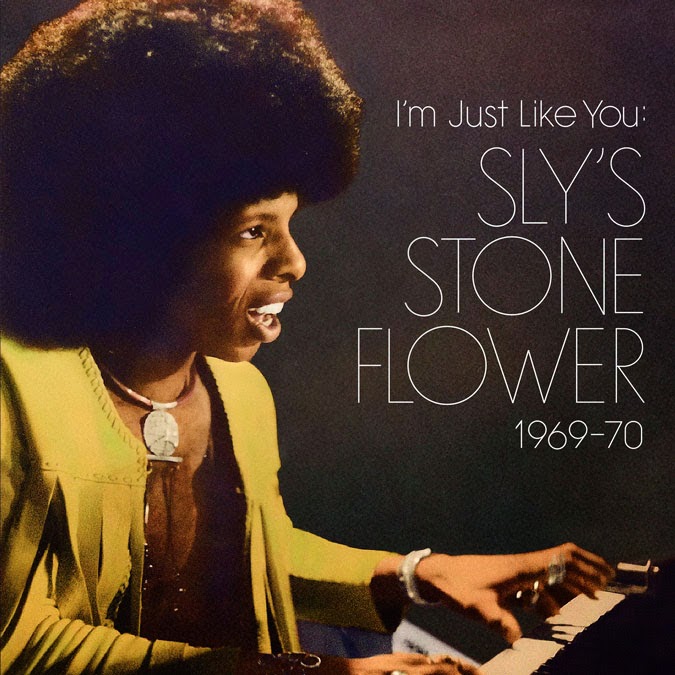 Sometimes we get a press release in the ol’ email inbox that makes digging through dozens of missives, spam from Nigerian princes, and pleas for publicity all worthwhile. Case in point – Light In The Attic Records’ news that they’re releasing I’m Just Like You: Sly’s Stone Flower 1969-70 on CD, digitally, and as a double-LP vinyl set.

So, you’re asking, what the heckaroonie is/are Sly’s Stone Flower? Well, here’s the back story, Bunkie, courtesy of the hard-working folks at Light In The Attic. By the close of 1969, Sly & the Family Stone were cruising along on the success of that year’s breakthrough Stand! album, which was itself fueled by the chart-topping single “Everyday People” as well as the band’s boisterous performance at the Woodstock Festival. Bandleader Sly Stone was already AWOL, however, at least mentally, his restless muse searching for other musical avenues to explore.

To this end, Stone and his manager David Kapralik launched Stone Flower Records. The label was distributed by Atlantic Records, and during its brief existence, released a handful of innovative and groundbreaking singles. The initial Stone Flower release was by Little Sister, a band fronted by Sly’s sister Vaetta Stewart, that resulted in a pair of Top 40 charting singles – “You’re The One” and “Somebody’s Watching You,” a cover of a song from Stand! The label didn’t experience nearly that level of success with its other releases, which including 45s from R&B singer Joe Hicks and a group called 6IX. For whatever reason, whether due to Stone’s waning interest, or because of flagging sales, Stone Flower folded in 1971.

The importance of Stone Flower Records is in what came afterwards. Although each of the label’s single releases was credited to the individual artist, they all featured material written, produced, and arranged by Sly Stone. It was on Little Sister’s singles that Stone first experimented with a drum machine for rhythms, and across all four 45s, Stone used the studio as a mad scientist would use a laboratory, experimenting with different sounds, electronic effects, and textures, shaping his signature funk and soul into new shapes. A lot of the ideas he perfected on Stone Flower’s releases would be used to create the classic There’s A Riot Goin’ On album in 1971.

Scheduled for September 30th, 2014 release on CD and digitally, I’m Just Like You: Sly’s Stone Flower 1969-70 collects those four original single releases as well as ten previously unreleased cuts from the label’s archives, eighteen songs in all, all re-mastered from the original tapes. The two-album vinyl set will be released on November 4th, but fans can pre-order the LP on limited edition lime green wax (while supplies last) through the Light In The Attic website. Very cool t-shirts and limited edition, hand-numbered 18”x24” prints are also available for order. Kudos to Light In The Attic for rescuing another treasure chest of long-lost music!