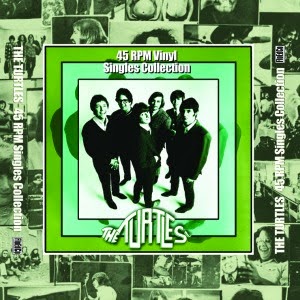 Here’s one you may have overlooked among the glut of recent vinyl releases and reissues. Mark Volman and Howard Kaylan have released (through FloEdCo/Manifesto Records) The Turtles 45RPM Vinyl Singles Collection, a box set of eight super-groovy 7” vinyl singles that revisit some of the band’s biggest hits of the late 1960s. Vinyl collectors and ‘60s pop enthusiasts alike can experience a bunch of great songs in their original format – 7” singles!

Kaylan and Volman (a/k/a “Flo and Eddie”) were the frontmen of the Turtles, a chart-topping outfit that mixed the melodic vocal harmonies of the Beatles with the pop sensibilities of the Monkees and the folkish charm and psychedelic roots of bands like the Lovin’ Spoonful. The band included a number of talented musicians through the years, including bassist/producer Chip Douglas (who also produced several Monkees’ hits) and drummer John Barbata (Jefferson Starship). The band’s first single, a cover of Bob Dylan’s “It Ain’t Me Babe” would go Top Ten, jumping off a string of hits like “Happy Together” (#1), “She’d Rather Be With Me” (#3), and “Elenore” (#6), all of which are included in the box set.

Unlike some of their peers at the time, the Turtles were real musicians and artists, and sometimes those singles that didn’t or barely charted were as interesting and entertaining as the hits. “Outside Chance,” for instance, was written by the late Warren Zevon, the song an obscure effort worthy of rediscovery, while “Love In The City,” a non-album track produced by Ray Davies of the Kinks, was an experiment in rock and psych-pop from the band’s final album, Turtle Soup. The band was only together for five short years, circa 1965-1970, but they released 20 singles during that half-decade (I’m not counting the post-break up 45s released by White Whale, the band’s label, that had little or nothing to do with the band), the best of which are included in the vinyl box.

After the demise of the Turtles, Kaylan and Volman would join Frank Zappa’s Mothers of Invention (along with bassist Jim Pons) as “the Phlorescent Leech & Eddie” as they were unable to use their real names due to contractual conflict with their former record label. The pair would add their harmony vocals behind Marc Bolan on the T. Rex albums Electric Warrior and The Slider as well as on Bruce Springsteen’s hit “Hungry Heart,” and enjoyed a brief career as Flo & Eddie, releasing a handful of albums between 1972 and 1981.

The pair legally regained the use of the Turtles name in 1983, as well as the band’s master recordings, and have since released several albums and toured frequently as the Turtles featuring Flo & Eddie. The Turtles’ legacy rests on these singles, however, songs that have influenced several generations of bands to follow. Autographed copies of The Turtles 45RPM Vinyl Singles Collection can be purchased on the Turtles website.