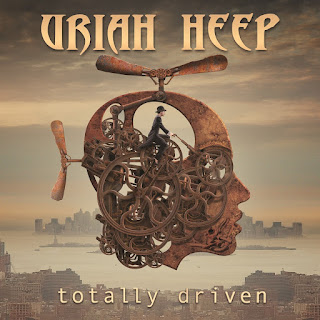 British hard rockers Uriah Heep have defied expectations throughout much of the band’s 45+ year existence. The fact that they’re still rockin’ here in the year 2015 is an impressive feat in itself, Heep continuing to tour the world and release underrated (and largely overlooked) music. Formed in 1969, the band experienced modest commercial success as one of the most popular arena-rock outfits of the 1970s, vying with legends like Led Zeppelin, Black Sabbath, and Deep Purple for their share of the youthful, head-banging rock ‘n’ roll audience. They’ve suffered through numerous line-up changes, the tragic results of substance abuse, and ever-changing musical trends that threatened to make the band obsolete more than once.

When punk and new wave took over the pop charts in the 1980s and legions of Heep-influenced “New Wave of British Heavy Metal” bands ruled the underground, Uriah Heep went abroad and developed lucrative markets by touring unlikely locales like Russia, the Balkans, and northern Europe. Heep continued to record throughout these lean years, with bandleader and founding guitarist Mick Box keeping the flame burning brightly through some tumultuous eras for a band that many in the U.S. and the U.K. had given up for dead.


Uriah Heep’s line-up stabilized in the late ‘80s with the addition of Canadian-born singer Bernie Shaw. Having made his bones with NWOBHM band Praying Mantis, Shaw provided the charismatic, leather-lunged frontman the band had been looking for since the (forced) departure of original vocalist David Byron in 1976. Shaw joined a solid instrumental roster led by the criminally-underrated Box (who is worthy of, but seldom mentioned when all those lists of great rock guitarists are compiled) along with the longtime Heep rhythm section of bassist Trevor Bolder and drummer Lee Kerslake, and fleet-fingered keyboardist Phil Lanzon (ex-Grand Prix). It’s this line-up that recorded the material that makes up Totally Driven, the band’s 25th official studio album.

A two-disc set featuring 27 songs, this material was originally recorded in 2001 while the band was preparing for their legendary “Acoustically Driven” and “Electrically Driven” concerts. Previously released with different track sequencing as Remasters: The Official Anthology, that album quickly went out-of-print, and these performances – re-recordings of classic Heep tunes – have sat on the shelf until now. As an anthology, Totally Driven performs admirably, offering two songs each from the band’s first eight albums (three from The Magician’s Birthday), one song from Fallen Angel, and nine songs from the first four Shaw-era albums circa 1989-1998. Curiously missing is any material from the band’s late 1970s/early ‘80s fallow period that includes High and Mighty, Byron’s tragic final album with the band; two of the three LPs featuring singer John Lawton; all three of the Peter Goalby era albums; and the band’s disastrous 13th album, Conquest, the only Heep release with singer John Sloman of Lone Star.


Even if the band’s classic line-up wasn’t set, their sound was almost fully-formed by the time of the 1970 release of their debut LP …very ‘Eavy…very ‘Umble (released as Uriah Heep in the states). “Gypsy” perfectly displays the band’s Gothic-influenced early style, the song’s lush orchestration at odds with its raging hard rock undercurrent. Shaw does a great job in approximating Byron’s over-the-top operatic howl, and the song’s martial rhythms provide an odd dignity to the affair. Plucked from their underrated 1971 sophomore effort Salisbury, “Bird of Prey” is a proto-metal rave-up that, in its original form, paved the road for bands like Judas Priest and Iron Maiden to hot-rod down a few short years later. Shaw again hits the high notes with reckless abandon and the song’s runaway rhythms are complimented by Box’s laser-focused solos.

Released in 1972, The Magician’s Birthday was the band’s follow-up to their commercial breakthrough, Demons and Wizards, released earlier that year. Three songs from the album, every one of ‘em a gem, are included here, beginning with the melodramatic “Sunrise;” the band’s backing instrumentation is duly elegant while Shaw takes a slightly different (but no less powerful) vocal approach to the lyrics. From here we jump into “Rain,” which closed the first side of the original vinyl (“Sunrise” fittingly opening the album). Lanzon’s wonderfully moody piano intro opens the door for Shaw’s carefully measured and appropriately breathless vocals, the singer perfectly capturing the melancholy of the original. It’s a beautiful Ken Hensley ballad performed nicely by Shaw and Lanzon, with just a hint of background orchestration for ambiance.


Fans remember 1971’s Look At Yourself as the album with the über-cool mirrored cover artwork, but the title track is another locomotive rocker that presages the NWOBHM with its stunning fretwork, soaring vocals, and manic keyboard runs. The modern incarnation of the band does it proud, with Box’s high-flying guitars and Kerslake’s carpet-bomb percussion creating a joyful, chaotic noise. Sweet Freedom, released in 1973, remains the band’s most popular album overall, moving better than four million slabs o’ wax worldwide. The title track from that album is a typical Heep joint, with swelling instrumentation building to an exhilarating crescendo before the vocals kick in. Shaw’s pipes are perfectly-suited to the emotionally-charged lyrics on what is a sort of metallic semi-ballad, with band harmonies and rich instrumentation creating a symphonic vibe.

Another fan-favorite from Look At Yourself is the Goth-tinged Byron/Hensley track “July Morning,” a guitar-heavy rocker that nonetheless carries itself like a dark, atmospheric dirge. Box’s guitars swing and sting like a hive of angry bees while Shaw’s ethereal vocals hang, hauntingly, above Lanzon’s eerily churchlike keys. Kerslake and Bolder provide a rock-solid rhythmic foundation to the song, their presence subtle but necessary. The aforementioned Demons and Wizards provided the band’s big break, their first LP to hit Top 30 in the states, vaulted onto the charts by the success of the hit single “Easy Livin’,” which rose to #39 on the strength of the song’s infectious melody, galloping rhythms, clashing guitars, and David Byron’s unbelievable vox. Shaw and crew knock it out of the ball park here with a machinegun-paced performance that is guaranteed to have you banging your head against the wall!


To be honest, I didn’t find the second half of Totally Driven to be nearly as engaging as the first fourteen tracks, but it certainly has its moments. As I’m personally partial to the 1970s-era Heep material I cut my teeth on as a young rock critic, the second disc’s reliance on late 1980s and ‘90s era material is less appealing, but no less valid. “Between Two Worlds,” from 1998’s Sonic Origami, undeniably hit your ears like a sledgehammer, the performance showcasing all the elements one expects from a Uriah Heep record – molten guitar, dark/light instrumentation, driving rhythms, and lofty vocals. “Love In Silence,” from 1995’s Sea of Light, displays a mature band with phenomenal chemistry that is capable of all sorts of musical surprises. Box’s acoustic strum serves as a backdrop for Shaw’s vocal gymnastics to float above while Lanzon’s fluid keyboard licks paint the canvas with brighter colors.

Jumping back to the decade of my misspent youth, “Blind Eye,” the third track here from The Magician’s Birthday, is another back catalog treasure worthy of your attention. With razor sharp guitars cutting through the song’s dense instrumentation, Shaw’s nimble vocals evince a barely-contained roar while an uncredited flautist balances on one leg in the background, his dancing notes providing a nice counterpoint to the band’s blustery rhythms. The enormous commercial success of Sweet Freedom came mostly on the back of the AOR hit “Stealin’,” reprised here as close to the original as one can get, with chiming organ providing unlikely grandeur behind Shaw’s vocals on this desperate outlaw tale. The gang vocals on the chorus are just as thrilling as they were 40 years ago, the song’s bludgeoning instrumentation providing bedrock for Box’s screaming guitar licks. Totally Driven closes with another fan fave, “Lady In Black” (from Salisbury), Box’s spry acoustic fretwork perfectly matched to snorting violins and Shaw’s howling, tortured vocals.


Totally Driven captures much of the magic of Uriah Heep’s lengthy and prolific career, comprised as it is of new performances of songs culled from better than half of the band’s twenty studio albums (at the time). The Shaw-fronted line-up had been together almost 15 years at the time these songs were captured on tape, and the enormous chemistry between the singer and the players is evident in the grooves. It’s long past time that the critical intelligentsia recognizes Heep’s status as one of the best hard rock bands of the past half-century, Uriah Heep continuing to defy expectations while pursuing a unique rock ‘n’ roll muse.

While it may seem like heresy to the longtime Heep faithful, Shaw is every bit as good a vocalist as David Byron was, albeit with a different style and technique. While none of the performances on Totally Driven are going to motivate you to trade in that beat-up old vinyl copy of Demons and Wizards, it’s a fine effort nonetheless, and a fitting launch to the band’s new self-titled independent label. By placing their past in a proper context, Uriah Heep has set the stage for the future. Grade: B (Uriah Heep Records, released November 13, 2015)