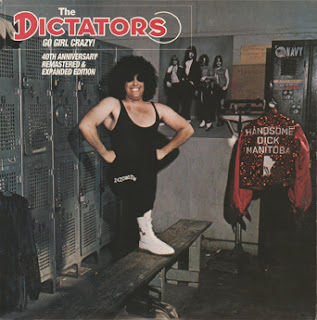 The year was 1975, and the Reverend graduated from high school in June, preparing for college by dealing dope, mowing half a dozen yards each week, and working the local Shoney’s Big Boy over the summer. A fervid follower of (and future contributor to) the great Creem magazine, I kept running into mentions of the Dictators, a NYC five-piece rock band beloved by critics. Figuring that the rag hadn’t steered me wrong when it hipped me to the New York Dolls, I picked up a copy of The Dictators Go Girl Crazy! and found the tonic for my troubles. I listened to the album constantly (much as I had with the two Dolls LPs), the band’s lyrical preoccupation with cars, girls, pop culture, and rock ‘n’ roll appealing to me like cream to a cat.

Much like their friends and cross-town predecessors the New York Dolls, the Dictators were a “band out of time” (songwriter and bassist Andy “Adny” Shernoff’s own words). Formed in 1973 by a group of friends that included Shernoff, guitarists Ross “The Boss” Funichello (née Friedman) and Scott “Top Ten” Kempner, and drummer Stu Boy King, roadie “Handsome” Dick Manitoba was added to the band by producers Murray Krugman and Sandy Pearlman (Blue Oyster Cult, The Clash) to be the Dictators’ secret weapon onstage and in the studio.

When released in March 1975, the album earned widespread critical acclaim for its proto-punk sound and irreverent lyrics. But the LP went absolutely nowhere commercially, tours opening for bands like Nazareth and Rush were minor disasters, and the band was soon thereafter dumped by Epic Records. After a hiatus of a couple years, the Dictators would sign with Asylum Records and release two more albums before splintering in the late 1970s. Like a creeping mold that can’t be washed away, the album continued to make friends and influence people over the years, and now – four decades after its original release – The Dictators Go Girl Crazy! has received a deluxe, re-mastered 40th anniversary reissue courtesy of Real Gone Music.


Opening with the sound of applause, the listener gets their first taste of “Handsome” Dick Manitoba, the trash-talking, fast-walking pro wrestler alter-ego of the band’s former roadie, Richard Blum. Manitoba’s album-opening rant gives way to a muscular guitar line that intros “The Next Big Thing,” a boastful, tuff-as-nails rocker that bristles with more attitude than a porcupine drinking malt liquor. The twin fretwork of Ross the Boss and Top Ten is stunning, with drummer Stu Boy King driving the rhythm with the subtlety of a subway car careening off the tracks and into the darkness. Shernoff’s defiant lyrics announced to the world that “the Dictators are here!”

So what does the band do for song number two? They cleverly re-imagine Sonny & Cher’s “I Got You Babe” years before Joey Ramone would do it proud with Holly Beth Vincent. Manitoba’s caterwauled vocals are crooned over a slow-grinding, often chaotic soundtrack that turns the 1960s pop gem into a punk standard. King’s solid percussion work opens “Back To Africa,” a slightly tongue-in-cheek love song that offers up some of Funichello’s most incendiary guitar playing alongside poppy group harmonies and deceptively complex backing instrumentation built entirely around flamethrower six-string and jackhammer drumbeats.

“Master Race Rock” is one of the Dictators’ most controversial songs, a ragged-but-rockin’ jam that could only be misunderstood by somebody who didn’t bother to listen to Shernoff’s satirical lyrics. Riding a slash ‘n’ burn soundtrack to ‘nowheresville,’ the band boldly declares itself the leaders of teenaged America, i.e. the “Master Race.” Funichello’s scorching leads push the amps to eleven, and the song rings its way out with shards of delicious feedback. By contrast, the thematically-similar “Teengenerate” is provided a softer, more melodic, ‘60s-era sound that hides the intents of its malevolent teen protagonist beneath a sunshine-pop sheen; even the twin guitars are more subdued here than elsewhere on the LP, chiming like a bell rather than crashing into a plate glass window. 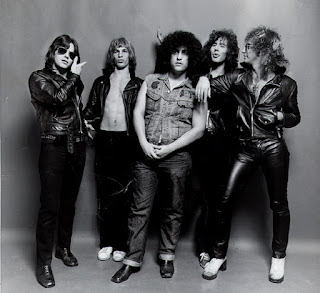 (I Live For) Cars and Girls


Channeling their inner surfer dude, the Dictators tackle a second cover on the album, the Rivieras’ upbeat “California Sun,” with an energy and aplomb equal to their take on “I Got You Babe.” With Manitoba’s yelping vox riding high in the mix, the band bashes its way through the song with reckless (and nearly criminal) abandon. “Two Tub Man” is one of the first songs that Shernoff penned for the band, and it remains a fan favorite to this day. A classic Manitoba rant introduced the song, the “Handsome” one spitting out boasts like “Nature Boy” Rick Flair in his prime as the song’s riff-happy opening explodes into a pure punk-rock supernova. With clashing guitars piercing the mix like an angry switchblade, along with the band’s over-amped energy, gang vocals, and overall nasty attitude, “Two Tub Man” delivers the blueprint so many British bands would follow just a couple years later. Oi, indeed!

The anti-social teenage angst of Shernoff’s “Weekend” is concealed even better than with “Teengenerate,” the band ripping off a familiar Buddy Holly riff to add a bit of shiny, wholesome, early rock ‘n’ roll energy to their otherwise shaggy construct of distorted guitars, bombastic percussion, and overall cacophonic instrumentation. “(I Live For) Cars and Girls” is the song that received the most airplay from The Dictators Go Girl Crazy! A clever pastiche of Beach Boys-styled pop; crude, irreverent humor; whip-smart, teen-oriented lyrics; and a lean, mean pop-rock soundtrack that only soars into absurdity a couple of times, the song was a work of satirical genius. Spot-on in its poetic depiction of mid-1970s teenage obsessions and malaise, the song also works as a sort of jaded commentary on the false innocence portrayed by the pop music of the ‘60s era.

This 40th anniversary reissue of The Dictators Go Girl Crazy! includes several bonus tracks, including a pair of remixes by rocker Andrew W.K., who does a fine job of re-imagining the tracks he chose, “Two Tub Man” and “Weekend.” Working from the original tapes, he doesn’t enlist the songs into the witness relocation program as much as he just plugs in little of his unique electric attitude into the re-mixes, amplifying the original intent rather than smothering it with a pillow. Both remixes are quite effective, and show how much Dictators’ DNA exists in Andrew’s own work. Of the numerous outtakes here, “Backseat Boogie” is interesting ‘cause it doesn’t appear on the album proper. A fierce jolt of booger-rock driven by King’s machine-gun rhythms (which are said to have flayed his hands during the recording), it’s a fine performance that should have been appended to the original LP. Instrumental takes on “Master Race Rock” and “California Sun” are a hoot, displaying both the band’s relative musical amateurism as well as their unbridled enthusiasm, the Dictators making a joyous noise as the tape rolls on...


Throughout the summer of ’75 and well extending into the next summer, when I moved out of the parents’ house (for the first time) and into an apartment with a biker buddy of mine, The Dictators Go Girl Crazy! shared equal time on the turntable with Springsteen’s Born To Run and, later, Thin Lizzy’s Jailbreak. All three albums shared a certain amount of manic energy, devil-may-care attitude, and purist belief in the power of rock ‘n’ roll to free us from a mundane working class rut.

The Dictators would go on to release a pair of fine albums – 1977’s Manifest Destiny (a solid ‘B’ grade) and the following year’s Bloodbrothers (a bona fide A+ classic) – before breaking up, but their undeniable influence can be heard in fellow travelers like the Ramones, the Fleshtones, Twisted Sister, the Beastie Boys, and many other bands on both sides of the pond. They would become more proficient with their instruments, playing even faster ‘n’ louder, and Shernoff would develop a keen eye as a lyricist…but never again would the Dictators make music as naïve, cheeky, and as fun as they did with The Dictators Go Girl Crazy! Grade: B+ (Real Gone Music, released December 4, 2015)

One of the greatest albums of all time!! 40 years later it's still awesome!! "Cars, Girls, Surf & Beer, nuthin' else matters here" Thank you Andy Shernoff! Thank you AJ for turning me on to this record in 1975!