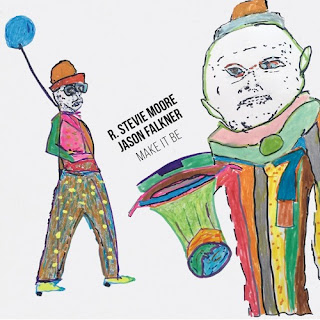 Here’s a match made in rock ‘n’ roll heaven: on March 10, 2017 Bar None Records will release Make It Be, a brilliant collaboration between underground rock legend R. Stevie Moore and power-pop icon Jason Falkner. The album was recorded by Falkner at his Rhetoric Studio in Hollywood, California and features a number of Moore originals as well as one co-write by Moore with longtime Nashville cohort Roger Ferguson and a song by Falkner.

R. Stevie Moore is a pioneer in lo-fi rock as well as the Godfather of Nashville rock ‘n’ roll. His classic 1976 album Phonography kick-started a nascent Music City scene that, until that time, had mostly consisted of Moore and his circle of friends playing original music, and a handful of horrible cover bands playing Top 40 tunes in local dive bars. Moore moved to New Jersey shortly after the release of Phonography and forged a reputation as an extremely prolific singer/songwriter, cranking out over 400 albums over the course of his lengthy career. Moore was also one of the original D.I.Y. artists, selling cassettes and CD-Rs via mail order, and making low-budget music videos that would become YouTube favorites. Moore moved back to Nashville a couple years ago and continues to make intriguing, creative music.

Jason Falkner came to prominence as a member of the L.A. “Paisley Underground” band the Three O’Clock, performing on their 1988 major label debut album Vermillion before the band broke up. He later joined neo-psychedelic rockers Jellyfish, working with the band on their classic 1990 album Bellybutton, his restless muse leading him to launch his solo career with the 1996 album Presents Author Unknown. In between Jellyfish and his solo debut, Falkner recorded the 1994 cult fave LP Ro Sham Bo with the Grays. Over the past 20 years, Falkner has earned a well-deserved reputation as a melodic songwriter and dynamic performer with four solo albums to his credit, the most recent being 2009’s All Quiet on the Noise Floor. Falkner has also lent his talents to recordings by artists like Beck, Brendan Benson, and Paul McCartney.

It’s an odd pairing – the power-popper and the lo-fi rocker – but it’s a collaboration that works. Moore is an exceptional songwriter and underrated guitarist, and his winsome vocals mesh perfectly with Falkner’s melodic tones. The two men put together exciting arrangements for the material that explore the boundaries of pop, rock, and avant-garde instrumental experimentation. Throw in a few spoken word passages and some spacey instrumentals alongside the pop/rock performances and the listener will find Make It Be to be an engaging, challenging, and entertaining collection of 21st century rock ‘n’ roll.

In a press release for the new album, Moore explains how the collaboration came together. “We unknowingly shared a mutual admiration bigtime and finally got in direct contact mid-2000s,” says Moore. “I think my friend Tim Burgess was the first one to turn him onto my stuff. Recording with him was a dream, totally incredible. We showed a similar sense of both crazed adventure and textbook pop discipline. The sessions moved fast, just gleefully piling on overdubs. I am grateful he allowed me to just dive into any left-field idea I felt. JF’s a marvelous producer and killer drummer, but I don't think he usually gets quite as much creative leeway to tinker with things as he did with me.”

If you’re unfamiliar with the brilliant – albeit unusual – talent that is R. Stevie Moore and have an hour to be entertained, check out the documentary film on the artist embedded below. Then get on over to Amazon.com and buy R. Stevie Moore and Jason Falkner’s Make It Be CD (also available on shiny black wax for you vinyl aficionados!)