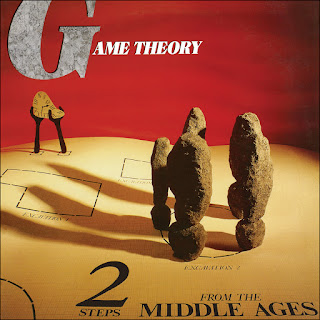 The good folks at Omnivore Recordings have done long-suffering Game Theory fans a huge favor with their campaign to reissue the out-of-print back catalog of the revered cult rockers. On June 9th, 2017 Omnivore will close the book on the late Scott Miller’s acclaimed band when they reissue Game Theory’s final album, 2 Steps From The Middle Ages on both CD and on vinyl.

Following the 1987 release of the equally acclaimed Game Theory album Lolita Nation (reissued by Omnivore in 2016), the band reunited in the studio with producer Mitch Easter (Marshall Crenshaw, R.E.M.), who had produced the band’s 1985 album Real Nighttime. Whereas Lolita Nation frequently teetered off the tracks, crossing Miller’s power-pop constructions with avant-garde instrumentation and ambiance, 2 Steps From The Middle Ages pursued a streamlined, more mainstream pop/rock sound on its thirteen songs, of which All Music Guide’s Stewart Mason wrote “the songs are uniformly terrific, with a least half a dozen all-time Game Theory classics...”

This Omnivore reissue of 2 Steps From The Middle Ages features the album’s original 13 songs, which are complimented by an impressive 11 previously-unreleased bonus tracks comprised of song demos, cover tunes, and live performances. The first pressing of the vinyl version of the album, which features the original 13 songs, will be on translucent orange wax and includes a download card for the entire CD tracklist. Packaging for 2 Steps From The Middle Ages includes rare and previously-unpublished photos by the band’s photographer, Robert Toren, as well as essays from producer Mitch Easter, musician Ken Stringfellow (The Posies, Big Star), and writer Franklin Bruno. The reissue is dedicated to Game Theory drummer Gil Ray, who was involved with the release of the previous albums and sadly passed away earlier this year.

Game Theory’s 2 Steps From The Middle Ages tracklist:
1. Room For One More, Honey
2. What The Whole World Wants
3. The Picture of Agreeability
4. Amelia, Have You Lost
5. Rolling with the Moody Girls
6. Wyoming
7. In A Delorean
8. You Drive
9. Leilani
10. Wish I Could Stand or Have
11. Don't Entertain Me Twice
12. Throwing the Election
13. Initiations Week