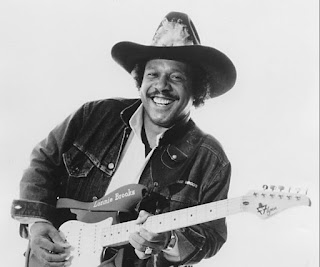 The blues world lost a bona fide legend on April 1st, 2017 with the passing of the great Lonnie Brooks, who was 83 years old at the time of his death. A brilliant guitarist and underrated, soulful vocalist, Brooks was a dynamic live performer who toured the world to no little acclaim.

Brooks was born in rural Louisiana as Lee Baker, Jr. He was taught to play the blues by his grandfather, but didn’t seriously consider pursuing music as a career until moving to Port Arthur, Texas in his early 20s and witnessing performances by Clarence “Gatemouth” Brown, T-Bone Walker, and Long John Hunter. Brooks’ first job as a professional musician – under the name ‘Guitar Jr.’ – was with zydeco legend Clifton Chenier’s touring band. Brooks also launched a solo career, releasing a number of regional singles for the independent local Goldband Records label.

Moving to Chicago in 1960, the guitarist changed his name to Lonnie Brooks (there was already a ‘Guitar Jr.’ performing in the Windy City) and he quickly found regular gigs in the notorious clubs of Chicago’s west side as well as nearly Gary, Indiana. Brooks recorded numerous early singles for labels like Chess Records and Mercury Records, and performed as a session musician and toured with various artists like Jimmy Reed (even playing guitar on Reed’s acclaimed Jimmy Reed at Carnegie Hall album).

Brooks recorded his debut album, Broke an’ Hungry, in 1969 for Capitol Records, working with producer Wayne Shuler, son of Goldband founder Eddie Shuler. A second album, Sweet Home Chicago, was recorded for the French Black & Blue label in 1975 during a European tour. Back in Chicago, Brooks came to the attention of Alligator Records founder Bruce Iglauer, the guitarist subsequently recording four songs for the label’s Grammy®-nominated Living Chicago Blues compilation album, which led to a contract with Alligator.

The pairing of Brooks and Alligator proved to be a winning combination, the guitarist releasing his label debut, Bayou Lightning, in 1979, prompting a six-page feature in the pages of Rolling Stone magazine (back when they actually wrote about blues music). Music historian and critic Robert Palmer, writing in Rolling Stone, said of Brooks’ “his music is witty, soulful and ferociously energetic, brimming with novel harmonic turnarounds, committed vocals, and astonishing guitar work.”

Brooks would record exclusively for Alligator through the rest of his career, releasing such acclaimed albums as 1980’s Blues Deluxe, 1983’s Hot Shot, 1991’s Satisfaction Guaranteed, and 1996’s Roadhouse Rules, all showcasing Brooks’ unique blend of Chicago and Louisiana-style blues, R&B, and roots music dubbed “voodoo blues.” He would appear in the 1998 film Blues Brothers 2000 and would co-author the book Blues For Dummies with his son Wayne Baker Brooks and musician Cub Koda of Brownsville Station.

Brooks’ last studio album was 1999’s Lone Star Shootout album, recorded with friends and fellow Gulf Coast blues veterans Long John Hunter and Phillip Walker. Brooks’ two sons – Ronnie Baker Brooks and Wayne Baker Brooks – both played guitar from an early age, and Ronnie toured with his father as a teenager. Both of the younger Brooks have established acclaimed solo careers, and in 2011 and 2012, the three musicians toured as The Brooks Family Dynasty, amazing audiences worldwide with their six-string pyrotechnics. Brooks’ last recording appearance was a guest on Ronnie’s 2017 album Times Have Changed.

Lonnie Brooks may not have been the most prolific of blues fretburners, releasing slightly more than a dozen studio and live albums over a career that spanned 60 years, but everything he recorded was of unusually consistent quality, passion, and musicianship. You can’t go wrong buying any CD recorded by Brooks, whose songwriting and performing skills are underrated, usually overshadowed by his immense six-string talents. Inducted into the Blues Hall of Fame in 2010, Brooks left an indelible mark on the world of the blues.

Visitation for Brooks will take place on Sunday, April 9th, 2017 from 3:00pm to 9:00pm at the Blake-Lamb Funeral Home on West 103rd Street in Oak Lawn, Illinois and his funeral will take place on Monday, April 10th at 11:00am the Liberty Temple Full Gospel Church on West 79th Street in Chicago. The family has asked that in lieu of flowers, donations may be made to The Lonnie Brooks Memorial Fund, P.O. Box 672, Dolton IL 60419.