Video of the Week: Siena Root’s Tales of Independence


Sweden’s classic rockers Siena Root should be no strangers to That Devil Music readers – we picked their song “The Way You Turn” as a previous “Video of the Week” offering, and the Rev reviewed their 2014 album Pioneers, which included the aforementioned song, writing “Siena Root’s Pioneers is a solid collection of swaggering, Marshall-stacked, hard-knocking cock-rock the likes of which we’ve seen little of since the Stones went disco in the late 1970s.”

Well, we’re glad to say that the hard-rockin’ Swedes are back with a new album and a video worthy of showcasing as part of our infrequent “Video of the Week” feature. The album, A Dream of Lasting Peace, will be released on June 23rd, 2017 via Hänsel & Gretel/MIG Music and will be available in several formats including CD, double-disc black vinyl LP and limited edition colored vinyl, and as a digital download. It’s the seventh outing for the Stockholm band, who released their debut in 2004 and have been wreaking rock ‘n’ roll devastation across the European continent ever since. 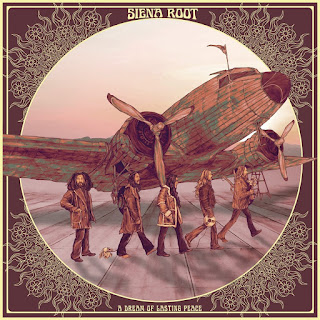 Pioneers was their first album to be distributed stateside, so Siena Root is still somewhat of an unknown quantity on these shores, but they’re definitely a band you should hear. Genuflecting at the old school altar, Siena Root tour with vintage equipment and are firm believers in the strength and power of analog sound, recording A Dream of Lasting Peace on traditional magnetic tape. Sojourning “deep into the Swedish forest” to avoid distractions and lay down their unique throwback sound, if the rest of the album is anything like “Tales of Independence,” it’s gonna be a monster!

The band features vocalist Samuel Björö, guitarist Matte Gustafsson, bassist Sam Riffer, keyboardist Erik Petersson, and percussionist Love Forsberg. The video for “Tales of Independence” doesn’t follow any specific narrative, but allows for a lot of face time for the hirsute rockers. Musically, it’s pure classic rock muscle, Björö’s vocals reminding of a more soulful version of Uriah Heep’s David Byron. Gustafsson’s switchblade guitar licks dance throughout the mix and the band’s backing harmonies are infectious but Petersson’s organ riffs are the steely thread that hold the performance together. It’s a dynamic, electrifying hard rock tune that incorporates a ‘70s-era vibe with contemporary instrumentation and it’s well worth your time to check out.

Buy the CD from Amazon.com: Siena Root’s A Dream of Lasting Peace