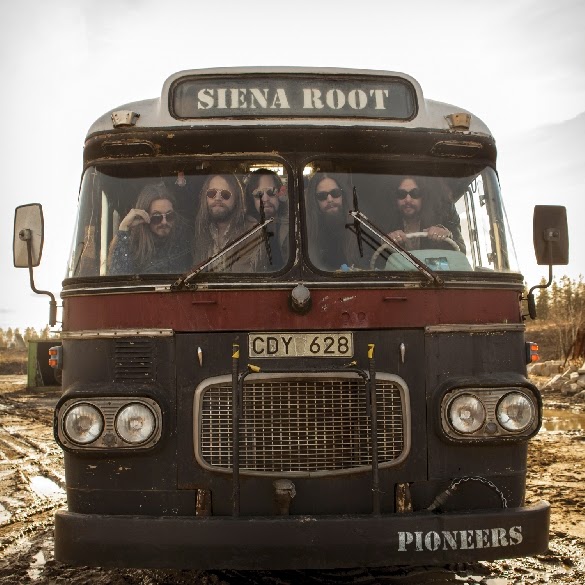 For a crusty old fart like the Reverend, who has literally spent decades writing about what is sometimes dismissed as “classic rock,” there’s a certain amount of satisfaction in the fascination and affection shown by young bands (and fans ) for vintage rock ‘n’ roll. From psychedelic acid-casualties like Blue Cheer and Iron Butterfly to hard-rock dinosaurs like Grand Funk Railroad or Mountain, from blues-rockers like Cream or Zeppelin to bands that transcend genre like the Grateful Dead, there are a lot of kids these days grooving on sounds that were fresh when the Rev was a green young stoner.

Maybe it’s boredom pushing new audiences towards old music, maybe it’s ennui, but I personally think that it’s music fans looking for cheap thrills in a world where the charts are dominated by frippery from the likes of Ed Sheeran or Sam Smith rather than Deep Purple or the Doors. There’s only one so-called “rock” band with an album in the Billboard Top Ten as I write and, to be honest, calling Fall Out Boy a “rock” band is like saying that Gerry Cooney was the best heavyweight boxer of his era (kids, look it up). It’s no wonder that a growing segment of music buyers is traveling to the past to get their kicks.


Sweden’s Siena Root are no youngsters by any reckoning, not with better than fifteen years and a half-dozen albums under their belt, but they’re relative newcomers to the U.S. scene and, as newcomers to this shore, they’re forced to built an audience one highly-amplified riff at a time. Pioneers, the band’s fourth studio album and their stateside debut (released by Cleopatra Records), is hyped on a sticker affixed to the CD case as “a heavy blend of Deep Purple and Iron Butterfly.” While that’s an apt description, even a casual spin of Pioneers shows that there’s a lot more going on in these grooves than a band trying to re-create their record collection.

Pioneers cranks up the amps from the opening notes, “Between the Lines” a heavy, plodding rocker with fierce guitars, blustery rhythms, and chiming keyboards that would have sounded equally at home in the mid-1970s as they do some four decades later. Singer Jonas Åhlén has an amazingly Americanized voice, his deep, rich vox gliding effortlessly above the industrial-strength riffage cranked out by guitarist Matte Gustafsson. While the song takes a few interesting musical twists and turns, Gustafsson's piercing fretwork and Erik Petersson’s ever-present keyboards anchor the performance.


The heavy, chaotic “7 Years” rolls out with drummer Love Forsberg’s explosive percussive beats, which are quickly joined by guitar and organ riffs that come as close as anything on Pioneers to mimicking early Deep Purple. An inspired mix of prog-rock, proto-metal, and goofy cosmic smiles, “7 Years” is too doggone funky, instrumentally, to be a true throwback, the song instead representing more of an original take on a classic rock sound. “Roots Rock Pioneers,” from which the album’s title is derived, is a spunky slice o’ hard rock heaven, with flaming guitar licks and spry keyboard runs that mix a bit of Atomic Rooster with a cuppa Uriah Heep and a soupcon of Sabbath in the creation of a heady musical brew.

Gustafsson’s fretwork on “Roots Rock Pioneers” is imaginative and complex, taking bluesy flights of fancy that even Ritchie Blackmore dared not entertain, while Petersson’s inspired keyboard-pounding out-maneuvers both Jon Lord and Ken Hensley, managing to drive the rhythm while still providing stylistic flourishes to joust with the guitar. The dark-hued “The Way You Turn” is an equally intricate tune that successfully blends Sabbath’s excellent use of menacing atmospherics with the contemporary edge of fellow graven idol worshippers like Opeth or Clutch.


“Going Down” provides a surprising about-face, the boogie-tinged hard rocker swaggering proudly like Paul Rodgers and Bad Company while still delivering plenty of high-octane six-string pyrotechnics. Forsberg’s percussive efforts are particularly impressive here, the drummer holding down the bottom end behind Gustafsson’s soaring leads with a masterful combination of heavy beats and light-fingered brushes. Bassist Sam Riffer deserves some credit here as well – while his presence is seemingly lost in the Sturm und Drang of the band’s lead instrumentalists, his steady hand provides the backbone the songs need to rip ‘n’ roar.

Siena Root’s “In My Kitchen” might be considered a blatant Doors rip-off by the unknowing, and while they do “appropriate” a certain ambiance and instrumentation from “Riders On The Storm” to open this exhilarating nine-minute-plus jam, they end up traveling to musical netherworlds that Jim Morrison only imagined in his dreams. A potent blend of psychedelic and bluesy hard-rock with out-of-this-world guitarplay, haunting rhythms, and Åhlén’s breathtaking vocals, the song’s lengthy, ethereal instrumental passage offers up enough spacey guitar licks, buzzing keyboards, and staggering percussion to satisfy any old-school rock aficionado.

The band’s reading of Led Zeppelin’s “Whole Lotta Love” is the album’s lone cover, a slightly skewed take on the classic rock gem that manages to capture the song’s bombastic spirit while offering an imaginative re-shaping of Jimmy Page’s original vision. Seemingly recorded in a cave, Åhlén’s leathery vocals rise above the din created by Gustafsson’s razor-sharp fretwork and Forsberg’s machinegun drumbeats to breathe new life into the song while the muted, echoed effect provided the performance offers a canvas for the virtuoso instrumentation.


Siena Root’s Pioneers is a solid collection of swaggering, Marshall-stacked, hard-knocking cock-rock the likes of which we’ve seen little of since the Stones went disco in the late 1970s. Providing a fresh perspective on a sound seemingly mined down to the last ounce of proverbial gold by the likes of Zeppelin, Purple, Heep, and Sabbath, Siena Root are one of a new breed of rock ‘n’ roll true believers using classic rock influences in the creation of an inspired contemporary sound that, while dismissed as yesterday’s news, is nonetheless earning the band a legion of fans worldwide.

With Pioneers, Siena Root joins the ranks of fellow travelers like Admiral Sir Cloudsley Shovell, Blues Pills, Handsome Jack, and Rival Sons – among a handful of others – in joyfully reveling in the sounds of the past while creating a bright new future for rock ‘n’ roll. Grade: B+ (Cleopatra Records, released November 17, 2014)