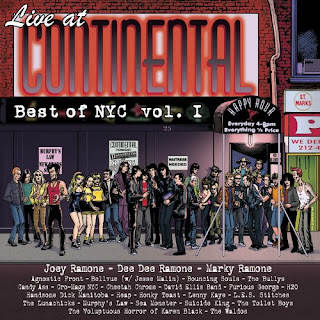 In honor of the closing of the infamous East Village music venue Continental, we’re republishing this vintage album review from the Rev’s archives. For more info on the legendary NYC club, check out Eric Davidson’s article at the Rock and Roll Globe.

Every city in America with any music scene at all has a rock ‘n’ roll club of some notoriety. In Nashville, it was Cantrell’s, the legendary late ‘80s dive that hosted bands like Black Flag, the Replacements, and the Gun Club as well as serving as home base for the Music City’s growing rock music scene. In Detroit circa 1980, the club du jour was the New Miami over in the Cass Corridor, where rich kids from Grosse Point would go slumming alongside rockers, fighting rats for their beer while watching Motor City bands like Flirt, Destroy All Monsters, and the Mutants. As for New York City, well, there are too damn many clubs to consider, from the infamous CBGB’s and Max’s Kansas City of the ‘70s to the late ‘90s hub of New York/New Jersey culture, the East Village’s Continental.

Continental opened in 1991 on Third Avenue in the East Village, a rather smallish club holding around 300 people. Club owner Trigger opened Continental with the idea of having a venue for local talent to get off the ground, a place for NYC bands to gather, swap ideas and create great music. Continental soon attracted some of the scene’s heavy hitters, with folks like Joey Ramone, “Handsome” Dick Manitoba and Adny Shernoff of the Dictators, and Blondie’s Debbie Harry hanging out at the club, hosting shows and generally supporting the scene. During the almost decade and a half of the club’s existence, local talents have graced the Continental stage alongside national artists like Green Day, Patti Smith, Iggy Pop, and Guns ‘N’ Roses.

A few years back, Trigger decided to document the music scene that had grown up around Continental and brought in the Rolling Stones Mobile Unit to capture a week’s worth of performances in the club with the idea of releasing the recordings as a live CD. Those performances, along with various live recordings from the club through the years, make up Live at Continental, Vol. 1 and Vol. 2. If you’ve ever had a fondness for NYC rock, and this scribe does, you absolutely, positively need these two records. Joey Ramone, Cheetah Chrome, Lenny Kaye, the Ramainz (Dee Dee and Marky Ramone), Murphy’s Law, and the Bouncing Souls are among the many artists gracing these two discs, delivering live performances you won’t find anywhere else.

Live at Continental, Vol. I kicks off with a slice of NYHC courtesy of Agnostic Front, followed quickly by Jesse Malin’s Bellvue, whose “Faded Flowers” sounds like an inspired cross between Jim Carroll and the Jayhawks. The Bouncing Souls deliver their “Quick Check Girl” with the usual reckless abandon and solid punk rock fervor. Other highlights of the first disc include Cheetah Chrome kicking out the jams on the Dead Boys’ “Sonic Reducer” with “Handsome” Dick on vocals; the Cro-Mags’ blistering hardcore rant “Street Justice” and Joey Ramone’s reading of “I Wanna Be Sedated,” which lights up the record with its spirit and energy.

Lenny Kaye, best known as Patti Smith’s guitarist, is an artist of considerable talent in his own right, delivering the dark, somber “Going Local.” Among the few bands here that I was unfamiliar with, Heap’s “Puerto Rican Girl” is a red-hot rocker and Furious George’s “I Am the King” is a punky rave-up. The vastly underrated H2O smacks down the crowd with its “Liberate” while LE.S. Stitches, Lunachicks, and Murphy’s Law crank out fine variations on a punk rock theme. Dee Dee Ramone and Marky Ramone are joined by Barbara Zampini in possibly the coolest cover band ever, the Ramainz running through a faithful reading of “Cretin Hop.” 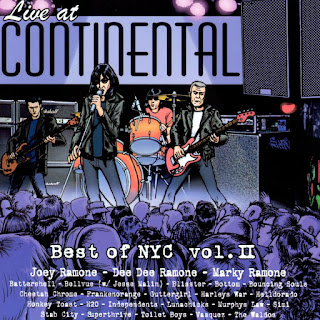 Live at Continental, Vol. II features many of the same artists found on the first disc, with Bellvue, the Bouncing Souls, Cheetah Chrome, Joey Ramone, H2O, the Ramainz, Lunachicks, and Murphy’s Law cranking out dynamic live performances for the Continental crowd. Bellvue’s “Money Runner” drones like the Pixies and hits with the power of a hundred ‘80s college rock bands while Cheetah Chrome’s “Love Song” leaves scorched earth in its wake behind Chrome’s incendiary guitarwork. Joey Ramone’s “Blitzkrieg Bop” and the Ramainz “Commando” illustrate the longevity and power of the Ramones’ legacy. H2O kicks serious ass with “Empty Pockets,” an anti-poverty screed that will make your ears bleed while the raucous Murphy’s Law classic “Somebody’s Gonna Get (Their Head Kicked In Tonight)” will certainly satisfy your hardcore Jones.

The second volume also offers a number of performances by lesser known (to audiences outside of NYC) artists such as Battershell, Independents, Stab City, Blisster, Gutter Girl, and Harley’s War. Battershell vocalist/guitarist Tammy Lynn sounds like a cross between Karen O and Wendy O Williams on “Shower Song,” the hard-edged pop song spiraling out of control into a cacophonous clash of instrumentation and attitude. Gutter Girl’s “Crazy Chicken” hits your ears with all the subtlety of a jackhammer while Harley’s War, fronted by the Cro-Mags’ Haley Flanagan, serves up the powerful “Steal My Crown,” a minimalist dirge punctuated by hard riffs and explosive rhythms. Blisster offers up guitar-driven pop/rock with a razor-sharp, punkish edge and Independents’ “Vampires From Outer Space” evokes memories of the Misfits with three-chord recklessness and B-movie soundtrack lyrics.

Other Big Apple bands featured on Live at Continental, Vol. I and Vol. II include Honky Toast, the Waldos, Toilet Boys, the Voluptous Horror Of Karen Black, Vasquez, Superthrive, Simi, Helldorado, Frankenorange, Bottom, the Bullys, Sea Monster, Suicide King, Candy Ass, and the David Ellis Group. There are 46 tracks here altogether, stretched across two excellent CDs. Produced by club owner Trigger and Continental soundman Noel Ford, the sound is uniformly good – not as slick and processed as your typically lifeless major label recording but head and shoulders above the usual live club bootleg. There is a bit of echo and a slight hollow feel to the tracks, but overall the performances are dynamic with crisp guitars crisp and sharp vocals. Turn up the volume a notch and it sounds like you’re standing right in front of the stage.

If you’re looking for the Strokes, the Mooney Suzuki, or the Yeah, Yeah, Yeahs, you’ll have to look elsewhere, bunkie! The bands on Live at Continental, Vol. I and Vol. II tend to lean towards the punk and hardcore side of the musical equation, but there’s enough pure, unvarnished indie rock in these grooves to satisfy a wide variety of tastes. Kudos to Trigger and Ford for creating the essential audio documentary of the Continental club scene in these two volumes – this shit rocks! The Rev says “check it out!” (Continental NYC, 2005)