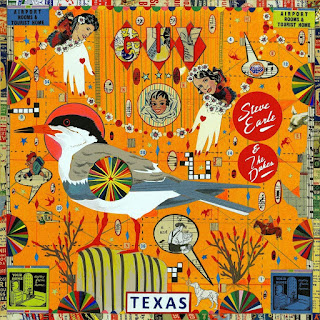 Steve Earle – Guy (Yep Roc Records)
Much as he did for his mentor, Townes Van Zandt, Americana legend Steve Earle pays tribute to his friend (and musical influence) Guy Clark by tackling some of the scribe’s best songs on Guy. As great a songwriter as Van Zandt may have been, much of his material depended on his own laconic delivery style; Clark, on the other hand, was a traditional country/folk songwriter which, IMHO, makes his material better for interpretation. Earle does his old friend right, with stellar performances of well-worn Clark tunes like “Dublin Blues,” “Rita Ballou,” “L.A. Freeway,” and the classic “Desperados Waiting For A Train” as well as lesser-known songs like the lovely “Old Friends” or the rollicking “Texas 1947.” The performances, by Earle’s talented touring band the Dukes, are filled with grit, emotion, and spirit but it’s Earle’s heartfelt vocals and Clark’s transcendent lyricism that make Guy a true joy to hear. Grade: A   BUY! 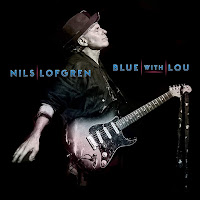 Nils Lofgren – Blue with Lou (Cattle Track Road Records)
Springsteen’s E Street Band cohort Nils Lofgren is an acclaimed solo artist in his own right, with a couple dozen acclaimed albums to his name. Blue with Lou is Lofgren’s first studio LP since 2011’s Old School, and it’s a real banger, one of the best in Lofgren’s extensive catalog. Half the twelve tracks here were co-written with the late Lou Reed and their electrifying performances provide a fitting tribute to the rock ‘n’ roll legend. Nils’ original songs like “Rock or Not” and “Dear Heartbreaker,” his tribute to Tom Petty, prove that Lofgren is no slouch in the songwriting department himself and if “Remember You” – an ode to his late dog Groucho – doesn’t leave you in tears, you’re not human. Blue with Lou offers a dozen guitar-driven songs featuring Lofgren’s warm, distinctive vocals and vivid, colorful fretwork, the result an entertaining old-school rock album that revels in its innocence. Grade: A   BUY! 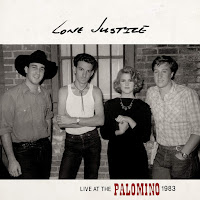 Lone Justice – Live At the Palomino 1983 (Omnivore Recordings)
Years before signing with Geffen Records, Lone Justice was just another L.A. band trying to make a name on a competitive, creative local scene that ran the gamut from Los Lobos and the Blasters to X and Black Flag. Featuring Maria McKee’s soaring vocals and guitarist Ryan Hedgecock’s inspired, underrated guitar playing, Lone Justice combined rock and country music, delivered with punkish intensity unlike anyone else at the time. Live At the Palomino 1983 captures the band at its most feverish, this captivating live show offering glimpses of their debut album in original songs like “Working Late” and “You Are the Light” as well as red-hot covers like Merle Haggard’s “Working Man Blues.” Celebrity fans like Tom Petty, Little Steven, and Linda Ronstadt got the band a major label deal, and even if they didn’t last very long, Live At the Palomino 1983 is proof that Lone Justice burned brightly. Grade: A   BUY! 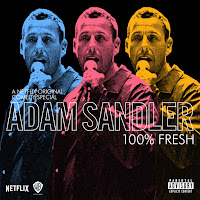 Adam Sandler – 100% Fresh (Warner Bros.)
Former SNL cast member Adam Sandler’s humor has always been an acquired taste, his stand-up chops questionable at best. Still, I’ve always cut him some slack; if he’s not as funny as his buddy Chris Rock, Sandler was still good for a couple of memorable bits per album. With 100% Fresh, the soundtrack to his new Netflix special, Sandler’s stand-up sinks as low as his recent made-for-streaming movies. A scattershot collection of half-baked sketches, unfinished songs, and plainly unfunny bits that take on the modern culture of ride-sharing, electric cars, cell phones and, yes, Amazon, there’s barely a single laugh to be had among the album’s 55 ‘tracks’. The production quality is shit, the club audiences obviously drunk, and Sadler’s smug, self-satisfying delivery tiring. Save your money and leave this turd on the shelf; buy something by comedic talents like Lewis Black, Kathleen Madigan, Mike Birbiglia, or Patton Oswalt instead. Grade: F   BUY? 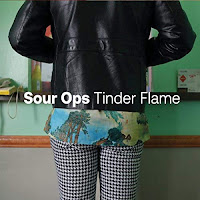 Sour Ops – Tinder Flame EP (Feralette Records)
Nashville’s cyclone-strength rockers quickly follow-up on their critically-acclaimed 2018 LP Family Circuit with a similarly-tailored five-song EP that’s guaran-damn-teed to blow the roof off your mobile home. Tinder Flame offers more of the same, but different, from the title track’s new wavish guitarfest and intriguing lyrics to the popish “Hung In the Trees,” which is Big Star by way of the Replacements. “Animal Magnetism” is simply magnificent, from its shimmering guitars (courtesy of brothers Price and Mark Harrison) to its heavy, uranium-weight rhythms (via bassist Tony Frost and drummer George Lilly) while “Again” is a relentless, psych-drenched leviathan demanding your allegiance. Sour Ops incorporates four decades of rock history into a sound entirely its own. If you’ve been looking for guitar-driven rock ‘n’ roll played the way the music’s forefathers (Chuck, Elvis, Mick & Keef) intended, check out Tinder Flame. Seldom have sixteen minutes of music been so damn satisfying! Grade: A   BUY! 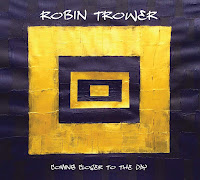 Robin Trower – Coming Closer To the Day (Provogue Records)
At an age when most artists would be content to rest on their laurels, 1970s-era guitar hero Robin Trower continues to regularly crank out albums. Coming Closer To the Day – the follow-up to the guitarist’s 2017 album Time and Emotion – manages to mix the bluesy undercurrent of Trower’s previous few releases with the psych-drench six-string pyrotechnics of his classic early LPs like Bridge of Sighs. While it’s always been good, Trower’s guitar playing hasn’t sounded this provocative in years, songs like the soulful “Truth or Lies,” the boogie-blues tune “Tide of Confusion,” and the exotic title track displaying a fire and purpose that you didn’t know was missing from his recent work. Yes, Trower’s flawed vocals pale in comparison to former frontmen like James Dewar or Davey Pattison, but who listens to a Robin Trower LP to hear him sing? His transcendent fretwork says all that needs to be said. Grade: A   BUY! 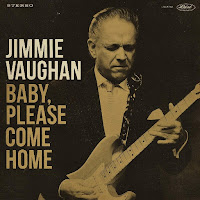 Jimmie Vaughan – Baby, Please Come Home (The Last Music Co)
Aside from being an incredibly-talented guitarist, Texas blues legend Jimmie Vaughan is also a remarkable song stylist. Albums like 2011’s Plays More Blues, Ballads & Favorites are loaded with covers but, unlike his friend and contemporary Duke Robillard, who perfectly captures the original vibe of an old standard, Vaughan also puts his own stank on each performance. Baby, Please Come Home is a true musical celebration, the guitarist revisiting influential blues and R&B tracks by legends like Lloyd Price, T-Bone Walker, Fats Domino, Jimmy Reed, and others. Price’s title track is infused with vintage ‘50s horn blasts, Walker’s “I’m Still In Love With You” is a sizzling shuffle with tinkling piano, Fats’ “So Glad” is a swaggering Orleans-flavored strut, and Clarence “Gatemouth” Brown’s “Midnight Hour” is simply drenched in soul. Vaughan’s fretwork is astounding throughout, so if old-school rhythm and blues is your game, then Jimmie Vaughan is your man! Grade: A   BUY!