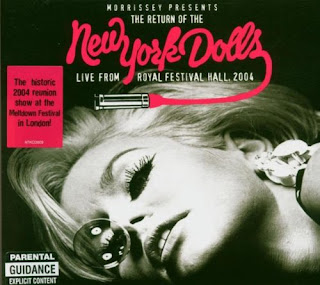 When I was a kid, say fourteen or fifteen, I read Creem magazine religiously. It was my cultural bible, the one single lifeline I had from the rural suburbs of Nashville to the entire world of music. Seldom did Dave Marsh, Lester Bangs, and friends steer me wrong, and thanks to these pioneers of rock criticism, I discovered bands like the Stooges, the Dictators, the MC5, the Flamin’ Groovies, and the New York Dolls.

The New York Dolls always had a special place in my heart, the band’s outrageous first album a constant companion after its release. In high school, friends would invite me to parties at Wendy J’s, knowing that if they left me with a six-pack and the stereo, that I would be the deejay. I’d keep the music playing while couples paired off and wandered up the hill behind Wendy’s house to make out, lulling them into complacency with a little Billy Joel or Aerosmith. Once I knew that they were, ahem...“busy”...I’d hit ‘em with the New York Dolls. One time I made it through the entirety of side one before somebody came down the hill to request a less boisterous choice in music.


Unfortunately, two albums into their brief career, the Dolls started to fall apart. First guitarist Johnny Thunders left the fold, followed soon thereafter by drummer Jerry Nolan, the two forming the Heartbreakers. Dolls’ vocalist David Johansen soldiered on with guitarist Sylvain Sylvain in various incarnations of the band. There was the disastrous Malcom McLaren era, which we can blame for the creation of the Sex Pistols (i.e. Dolls lite), but by 1977 – a mere four years after their groundbreaking first album – the band was kaput. Notorious junkie Thunders would overdose in 1991 and Nolan would die a few months later of a stroke. The spirit of the New York Dolls would live on however, influencing hundreds of young bands fueled by the Dolls’ two timeless studio albums, and countless live bootlegs and outtakes/rarities collections.

One of the young artists infatuated with the New York Dolls was a chap by the name of Morrissey, who would make a splash of his own during the ‘80s as frontman for the Smiths. The former President of the Dolls’ British fan club, Morrissey invited the surviving members of the band to perform at the 2004 Meltdown Festival that he was involved in promoting. Johansen, Sylvain and bassist Arthur Kane agreed, enlisting guitarist Steve Conte from Johansen’s band and drummer Gary Powell from the Libertines for the performance. The evening was subsequently captured on both CD and DVD as Live From Royal Festival Hall, 2004, released on Morrissey’s Attack Records label and distributed stateside by Sanctuary.

You Can’t Put Your Arms Around A Memory


Live From Royal Festival Hall, 2004 offers up a predictable selection of the Dolls’ “greatest hits,” drawing heavily from the band’s classic debut album. Tunes like “Looking For A Kiss,” “Jet Boy,” “Trash,” “Frankenstein,” and “Personality Crisis” still rock the house like a wrecking ball, Johansen’s hoarse, soulful vocals none the worse for the wear some thirty years after the fact. Sylvain still has awesome chops, and although Conte is a solid technical guitarist, he doesn’t possess the reckless spontaneity that Thunders brought to the band back in the day.

As a sort of “reunion” show, Live From Royal Festival Hall, 2004 passes muster, Johansen’s energetic performance breathing new life into the old songs. The band’s tribute to Johnny Thunders – a heartfelt reading of his “You Can’t Put Your Arms Around A Memory” – appropriately revisits one of Thunders’ best songs. The entire reunion performance was considered a success and there was talk of future shows. Sadly, tragedy struck the Dolls again shortly after the Meltdown performance when founding member Arthur “Killer” Kane died of previously undiagnosed leukemia.


Live From Royal Festival Hall, 2004 won’t replace the two original Dolls studio albums, but it is a fine tribute to the band’s legacy, offering a glimpse of the energy and intensity of one of rock ‘n’ roll’s finest cult bands. Just as the New York Dolls inspired a generation of punks like the Ramones, the Damned, and the Smiths, so too can their influence be found in the sound of bands like the Libertines, the Strokes, the Hives, and others who genuflect at the garage rock altar. This is music straight from the wellspring of rock ‘n’ roll, timeless in nature and a hell of a lot of fun... (Sanctuary Records, released October 5, 2004)