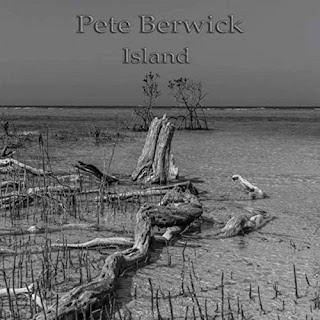 Pete Berwick – Island (Shotgun Records)
Second-generation country outlaw Pete Berwick made his bones playing the honky-tonks and juke-joints that existed on the fringes of late 20th century Nashville. Berwick’s intelligent wordplay has always been his strength and previous albums like Ain’t No Train Outta Nashville show that he could rock a bit as well. Island is a departure for Berwick, a collection of mostly-introspective, insightful mid-tempo tunes that lean more country than rock, more blues than folk. You can’t argue with the results, songs like “Anyway” and “Island” speaking to the heartbreak of love and loneliness while “The Streets of Pasadena” is country tear-jerker worthy of George or Merle. “One Setback At A Time” gallops by comparison, the song a statement of defiance set to a lush soundtrack that would make it a hit single in a more enlightened era. Island is Berwick’s most melodic and mature album yet, a masterwork from a unique craftsman. Grade: A+   BUY! 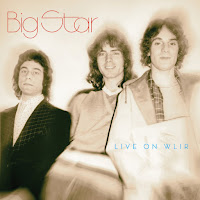 Big Star – Live On WLIR (Omnivore Recordings)
After the release of 1974’s sophomore effort Radio City, power-pop pioneers Big Star sojourned to Ultrasonic Studios in Long Island, NY to record this live-in-the-studio radio broadcast. Although this performance was previously released by RykoDisc as Live, it’s been out-of-print for the better part of a quarter-century until rescued by the good folks at Omnivore. Working from the original studio session tapes, the often-bootlegged performance captured by Live On WLIR displays all the rawness and immediacy of the radio broadcast but provided a modern-sounding sonic clean-up. The then-new line-up of Alex Chilton, John Lightman, and Jody Stephens crank out an energetic 14-song set that includes “September Gurls,” “Mod Lang,” “Thirteen,” and “I’m In Love With A Girl,” classic tunes upon which the Big Star mythology would later be built. If you’re a fan of Big Star and/or power-pop and don’t have Live On WLIR, what are you waiting for? Grade: A   BUY! 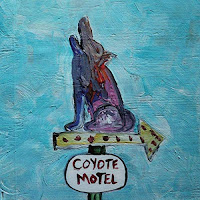 Ted Drozdowski – Coyote Motel (Dolly Sez Woof Records)
Nashville-by-way-of-Boston blues guitarist Ted Drozdowski steps aside from his regular band the Scissormen to explore the outer edge of Americana with Coyote Motel. Not surprisingly, given his status as a well-respected music journalist, Drozdowski is a superb, if underrated lyricist and his intelligent story-songs here are accompanied by apt, imaginative music and wickedly effective six-string play. The based-on-a-true-story “Still Among the Living” benefits from Drozdowski’s devastating fretwork, somber vocals, and an overall ominous vibe. The “whimsical” apocalyptic tale “Los Alamos” is deceptively poetic with a maddening riff. The heartfelt “My Friend” is a powerful tribute to R&B great “Mighty” Sam McClain while the anti-racism ode “Jimmy Brown” is an artistic maelstrom, roaring with a punkish fury. Altogether, Coyote Motel is a hell of a lot of fun, a near-perfect fusion of blues, country, rock, and folkish elements that shouldn’t work but instead sounds like Drozdowski invented the entire Americana genre. Grade: A   BUY! 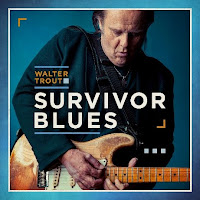 Walter Trout – Survivor Blues (Provogue Music)
Contemporary blues artists stand on the shoulders of giants, and the great Walter Trout pays tribute to some of these legendary talents with Survivor Blues. Not your run-of-the-mill covers album with predictable results, the guitarist digs deep into blues history to unearth long-hidden gems by often-overlooked talents like Sunnyland Slim, Luther Johnson, and J.B. Lenoir, among others, each performance provided Trout’s unique creative spin. Trout inhabits Chicago bluesman Jimmy Dawkins’ “Me, My Guitar, and the Blues” with soaring solos while Floyd Lee’s “Red Sun” is a potent blues-rock stomp with classic rock riffs. Guitarist Robbie Krieger of the Doors sits in on Mississippi Fred McDowell’s country-blues classic “Goin’ Down To the River,” providing elegant solos above Trout’s hypnotic riffs. The twelve tracks chosen by Trout for Survivor Blues serve as a primer for the genre, each performance imbued with the passion and sincerity that has long been the guitarist’s trademark. Grade: A   BUY!

Check out the Reverend’s interview with Walter Trout on the Rock and Roll Globe website! 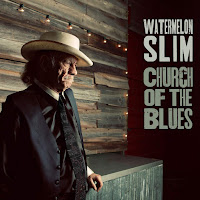 Watermelon Slim – Church of the Blues (Northern Blues Music)
Erudite singer/songwriter Watermelon Slim worships at the Church of the Blues, delivering his typically droll brand of roots-rock and traditional blues music with whip-smart lyrics and no little insight. Slim is fronting a trio here, but he’s joined in the studio by a wealth of musical talent including legendary guitarists Bob Margolin and Joe Louis Walker and soul-blues singer John Nemeth. The results are stunning, Slim layering his half-spoken, half-sung Okie drawl and greasy slide-guitar atop original tracks like the topical “Charlottesville (Blues For My Nation),” “Too Much Alcohol,” and “Post Modern Blues” as well as covering gems from legends like Muddy Waters, Allen Toussaint, Mississippi Fred McDowell, and Howlin’ Wolf. Church of the Blues provides the listener with an entertaining, spiritual experience that rocks like a tent revival, Watermelon Slim a true believer preaching the power of the blues. Grade: A   BUY!