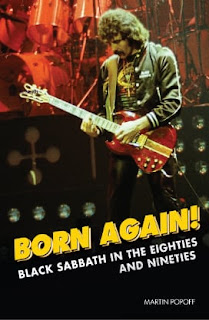 As a teenage rock ‘n’ roll fanatic in the early ‘70s, you discovered bands in a myriad of ways. Sure, FM radio was the primary source of exposure, especially if you were lucky enough to live someplace like Nashville where WKDA-FM offered a progressive rock playlist (the station would get much more conservative in its musical choices after changing its call sign to WKDF later in the decade). Zines were another invaluable tool in discovering new music, and I devoured monthly issues of Creem and Crawdaddy, trucked down to the corner store every two weeks for a new Rolling Stone, and cherished copies of obscure rags like Zoo World, Fusion, and Rock magazine whenever they could be found. Friends, especially older ones, helped fill in a lot of the blanks, and I have to thank long-lost compadres like Rick DiBello and Mark Vantrease for introducing me, respectively, to Spirit and the Mothers of Invention.

As I wrote in my review of rock historian Martin Popoff’s excellent Sabotage! Black Sabbath In the Seventies book, it was Rick and Bill Berg and their biker buddies that turned me onto Sabbath, a band that has remained among my favorites for nearly 50 years. Popoff is a familiar, much-reviewed writer ‘round these parts; the author of some 80 books on hard rock and heavy metal, he was the founder and former editor of the Canadian metal zine Brave Words & Bloody Knuckles, and a frequent contributor to music publications like Goldmine and Record Collector (U.K.), among many others. Here is the part where I’m duty-bound to mention that Martin is also a pal of mine, a friend and colleague of many years, and a fellow masochist trudging away in the treacherous trenches of self-publishing.


Black Sabbath is obviously one of Martin’s favorite bands as well, as he’s madly written three previous books on the band, including the aforementioned Sabotage!, the informative (and essential) Black Sabbath F.A.Q., and Black Sabbath: Doom Let Loose, a gorgeous illustrated history of the British metal pioneers. Born Again! Black Sabbath In the Eighties and Nineties compliments the other three volumes by plowing new turf; nothing here overlaps those other books. As is his usual literary modus operandi, Martin provides the reader with an album-by-album history of these contentious two decades, relying on interviews with Sabbath members and fellow-travelers to create a narrative that includes just the right amount of his critical insight.

Born Again! opens with the release of Sabbath’s 1980 “comeback” album, Heaven and Hell, which vaulted the band back into Platinum™ record sales territory. Sabbath had booted flamboyant frontman Ozzy Osbourne, whose well-documented rock star excesses had begun catching up with him in the late ‘70s. Enlisting former Elf and Rainbow vocalist Ronnie James Dio, Sabbath forged a heavier sound for the new metallic decade with the Heaven and Hell and Mob Rules albums. In recapturing a bit of their former creative and commercial glory, they also sparked an ‘Ozzy or Dio’ debate that, while not as turbulent as ‘David Lee or Sammy’ discussions among the Van Halen faithful, nevertheless split the band’s fans into two distinct sides.

Tony Iommi’s Years In the Wilderness


All good things eventually come to an end, however, and when egos clashed over the mixing of Sabbath’s 1982 Live Evil album, Dio packed his bags and exited stage right, taking drummer Vinny Appice (who had replaced the ailing Bill Ward for Mob Rules) with him to form the subsequently-successful band that bore his name. Thus begun Tony Iommi’s years in the “wilderness,” the Sabbath riff master keeping the band together, for better or worse, over the ensuing years and decades. The band would become a revolving door of musicians and singers, Iommi recruiting legendary rockers like Ian Gillan (Deep Purple) and Glenn Hughes (Trapeze) and lesser-knowns like Tony Martin and Ray Gillen (Badlands) to front Sabbath and journeymen musos like drummer Cozy Powell and bassist Bob Daisley to fill holes in the roster as Ward and original fat-string player Geezer Butler rotated in and out of the line-up.

The results of this uncertainty and tumult were mixed – only Martin held onto the microphone for more than a single album, and Gillen didn’t even get that – but Sabbath nevertheless released some pretty decent, albeit overlooked records during this period (1983’s Born Again and 1987’s The Eternal Idol) as well as some stinkers (1994’s Cross Purposes), and one that never should have seen the light of day (1995’s horrible Forbidden). An ill-fated reunion with Ronnie James Dio resulted in 1992’s Dehumanizer album and, after much blood, sweat, and fiercely-negotiated tears, the inevitable band reunion with Ozzy occurred (tho’ it didn’t include original drummer Bill Ward at first), which yielded the rockin’ two-disc live Reunion album (which did include Ward!). Popoff dives deeply into these shadowy corners of the band’s career, standing out of the way and allowing Sabbath band members and related parties to create an oral history of the 1980s and ‘90s.


I admittedly knew a lot less about the lengthy period of Sabbath’s career covered by Popoff’s Born Again! than I did about the early years of the band, but I walked away from the book with a better knowledge of the artistic dynamic that drove Black Sabbath through the ‘dark’ years. The late, beloved Ronnie James Dio comes across as a bit of a prima donna in his comments and recollections. Tony Iommi’s ego matches that of other great musicians (Ritchie Blackmore comes to mind), which made clashes of personality with other strong-willed talents (Dio and Ian Gillan, notably) a certainty.

Ozzy Osbourne comes across as a clueless dolt in Born Again!, a charismatic singer whose wife and manager Sharon holds the strings (and has seemingly been the ‘agent of chaos’ in the Ozzy/Sabbath camp all these years). Beleaguered original Sabbath drummer Bill Ward is the conscious of the band, and has usually gotten the short end of the stick when dealing with his former band members while Geezer Butler is the literal and figurative ‘heartbeat’ of the band, reappearing in the story to help propel Sabbath to the next level when needed. Popoff spins the tale, warts and all, providing the reader with no little insight into the musical legacy of one of rock’s most misunderstood and often-maligned bands. Grade: A (Power Chord Press, published January 2019)

Buy the book directly from the man himself!