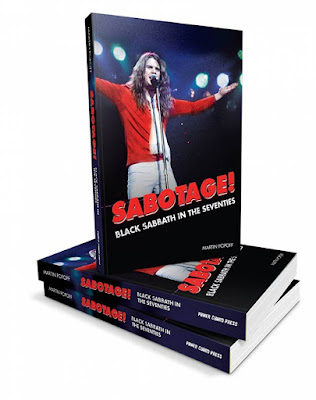 Kind of like the ‘Old Faithful’ geyser in Wyoming’s Yellowstone National Park, you can depend on writer and music historian Martin Popoff to crank out new books with alarming and prolific regularity. He’s begun publishing them so frequently that I can’t keep up with buying them all, much less the reading of them. With almost 80 titles to his name (at this time), including über-cool coffee-table tomes like Led Zeppelin: All the Albums, All the Songs and Pink Floyd: Album By Album, Martin has penned books on hard rock and heavy metal legends like Rush, Judas Priest, Thin Lizzy, Motörhead, and Deep Purple, among many others. This is the part of the review where I tell you that Martin is a buddy of mine, a colleague and friend of many years, but before I got to know this talented writer, I was a fan.

My music library includes roughly three-dozen books that Popoff has written dating back nearly two decades, including some titles that he’s probably forgotten about. While I’ve reviewed but a fraction of these, I’ve absorbed every word ‘cause, you see, Martin is one of the few music archeologists willing to venture into the darks corner of rock ‘n’ roll history, an area far too often ignored by mainstream pundits. The founder and former editor of the Canadian metal zine Brave Words & Bloody Knuckles and a frequent contributor to music-oriented publications like Goldmine and Record Collector (U.K.), Martin is at his best when writing about his earliest musical obsessions – bands like the legendary Black Sabbath.


I was 13 years old when I first heard Black Sabbath...it was in the Berg’s basement in Erie PA. Their house was on the corner where our bus stop was, and a couple of the ‘braver’ of us would congregate in the basement where my schoolmate Rick and his older brother Bill lived. They had built “crash rooms” with mattresses and plywood walls, and they had a fridge stocked with beer and soda and a beat-to-hell old pool table. The boys lived downstairs while their parents and younger sister lived upstairs. Bill Berg rode with a local bike club, so he often had biker friends that crashed in the basement and they smoked and drank and did whatever while we wide-eyed young ‘uns stared in wonder. Sabbath’s first two albums were on heavy rotation in the basement over the fall and winter of 1970-71, and I became enamored of the band...

Sabotage! Black Sabbath In the Seventies is Martin Popoff’s third book on the band, including the informative Black Sabbath F.A.Q. and Black Sabbath: Doom Let Loose, a gorgeous illustrated history of the British metal pioneers. No worries, however, as this new book compliments the other two as opposed to re-hashing ancient history, tho’ there’s plenty of band history to be had within these pages, with little or no overlapping content with Popoff’s previous efforts. As is his usual literary modus operandi, Martin offers an album-by-album band history via his numerous interviews with the musicians on a roughly 2:1 ratio with his critical commentary taking a back seat to the band members’ own words.


Sabotage! covers Sabbath’s groundbreaking early years, (i.e. the ‘70s), when the band drew up the blueprint for what we now know as “heavy metal.” Popoff starts with their self-titled 1970 debut album, pores over classic LPs like Paranoid, Master of Reality, and Sabotage, and finishes the decade with 1978’s Never Day Die, singer Ozzy Osbourne’s swansong with the band before launching his successful solo career. Osbourne would later reunite with his original Sabbath bandmates in 2011, but that’s a story for another book. Sabotage! provides plenty of information on the creation and recording of the band’s first eight albums – six of which are essential for any classic rock fan – with bassist Geezer Butler (the band’s lyricist) and drummer Bill Ward (the band’s de facto historian) in particular telling some great stories about each album.

Guitarist Tony Iommi – the band’s riffmaster, taskmaster, and creative genius – offers insight into Sabbath’s lengthy history and their songwriting process while Ozzy, well…he’s Ozzy, right? The band’s charismatic, larger-than-life frontman, Oz provides interesting anecdotes about Sabbath’s travails on the road as well as clashes with religious zealots and occultists who both misunderstood the band’s lyrics. As the only non-playing member of the band, Osbourne displays a humanizing vulnerability for a rock star, always worrying about his place and contributions (which were massive, by the way, just as Ronnie James Dio’s would be later). Along with his multiple interviews with all four Black Sabbath members; associates like Jim Simpson, the Sab’s first manager; and musicians like Rick Wakeman and Jezz Woodruffe, Martin rounds out his narrative with vintage material from the yellowing pages of music zines like Circus, Creem, and Melody Maker.


As he usually does, Popoff provides a valuable service with Sabotage!, documenting a fruitful and creative era of one of rock music’s most innovative and influential bands in Black Sabbath. The 1970s were a tumultuous time for the band, but they persevered and extended their legacy to the modern day in spite of changing musical currents and consistent belittling by the music press. Martin preserves the history of the era with both his own insightful commentary and the memories of the band members, resulting in an interesting and entertaining tale.

Will we eventually see a fourth Sabbath book from Popoff? One that covers the equally fascinating decade of the ‘80s and the six albums released by the band with singers like Dio, Ian Gillen, and Glenn Hughes? We can certainly hope so, as that seems to be a story waiting to be told, and there’s nobody better to tell it… Grade: A (Power Chord Press, published May 2018)

Buy it directly from the man himself!