Book Review: Martin's Popoff's Led Zeppelin - All the Albums, All the Songs (2017) 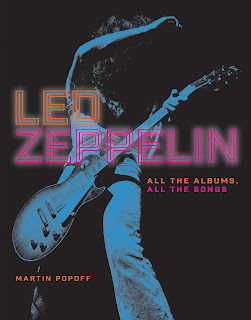 From their groundbreaking self-titled debut album in 1969 until they called it quits in 1980 after the death of drummer John “Bonzo” Bonham, Led Zeppelin re-wrote the book on rock ‘n’ roll stardom. The band’s immense popularity allowed them to get over on promoters who, at that point, were taking the lion’s share of box office receipts from a concert. Zeppelin grabbed that cash for themselves, forever changing the playing field for a generation of touring bands. They flew around the country to perform in their own private jet (nicknamed The Starship), launching from their base at the Continental Hyatt House hotel (a/k/a “Riot House) in Los Angeles. Stories of the band’s rock star excess are legend.

Musically, the band built on its blues-rock roots to incorporate British folk and Middle Eastern flourishes, among other disparate influences, etching in stone a blueprint for hard rock and heavy metal bands to follow. The band’s musical and cultural influence is inestimable, but Zeppelin was also incredibly successful commercially. The band’s meager catalog of nine studio and one live album released during between 1969 and ’82 have sold better than one hundred million copies domestically, placing them second only to the Beatles in U.S. record sales, earning the band six chart-topping albums. Posthumous releases like 1997’s BBC Sessions and 2003’s live How the West Was Won have only added to that sales total while numerous compilation albums, box sets, and reissues have kept Zep’s popularity strong here in the second decade of the new millennium.

Martin Popoff’s Led Zeppelin: All the Albums, All the Songs


Zeppelin’s status as one of a handful of truly legendary acts in the history of rock music has resulted in the publication of, literally, hundreds of books that discuss and dissect nearly every aspect of the band’s storied history. So, nearly four decades after the band called it quits, the question is ‘do we really need another book on the almighty Zep?’ If it’s Martin Popoff’s Led Zeppelin: All the Albums, All the Songs, the answer would be a resounding ‘Yes!’ The founder and former editor of the acclaimed Brave Words & Bloody Knuckles music zine, Popoff has literally written the history of hard rock and heavy metal with over 70 published books that cover every rock ‘n’ roll legend from Deep Purple, Thin Lizzy, Black Sabbath, and Yes to relatively obscure bands like Riot and Max Webster as well as acclaimed trilogies on the ‘New Wave of British Heavy Metal’ and his recently-completed history of thrash metal.

It must be noted that Martin is a friend and colleague, but it is without bias that I can unequivocally state that Led Zeppelin: All the Albums, All the Songs is his best-looking tome to date, the book’s imaginative and striking design and graphics even edging out Popoff’s lush Ramones coffee-table book (Ramones at 40). A gorgeous 8”x10” hardback rife with color and B&W photos, Popoff’s Led Zeppelin is more than a mere looker to leave sitting on a table to impress your rock ‘n’ roll friends. Popoff’s commentary on every single song from the band’s nine studio albums is impressive in its scope, not only providing the reader with detailed information on each tune but offering context and historical asides as well.

As such, Popoff dives deep into songs like the band’s cover of blues legend Willie Dixon’s “You Shook Me” (from the debut album), exploring its roots and offering critical appraisal of the band’s tentative performance. The band’s best-known, if not most popular song – “Stairway To Heaven” – is compared with its original influence (Spirit’s “Taurus”), its roots in British folk revealed in depth. Just about every song in the Zeppelin catalog is thus discussed, Popoff bringing new details to these well-worn compositions, each song commented upon with knowledge and insight. Popoff balances his Zeppelin fandom with the critical eye of a music historian, his words accompanied by a wealth of band photos, memorabilia, rare import album covers, and other cool graphics. The only ‘omission’ that I found is that of the Zeppelin rarity “Hey, Hey, What Can I Do,” a personal favorite that was the B-side of the “Immigrant Song” single and the band’s only non-album B-side (at the time, it only appeared on a Dutch compilation of British folk-rock bands).


That’s a minor cavil, indeed – the rest of Led Zeppelin: All the Albums, All the Songs shines as brightly as the band did at its mid-to-late ‘70s peak. Well-researched and mulled over and written with the enthusiasm that Popoff brings to every book project, this is one tome that every Led Zeppelin fan is going to want to add to their collection. After reading Led Zeppelin: All the Albums, All the Songs you’ll find a newfound appreciation of those songs and albums that you love and know so well. Grade: A+ (Voyageur Press, published October 1, 2017)

Buy the book from Amazon.com: Martin Popoff’s Led Zeppelin: All the Albums, All the Songs