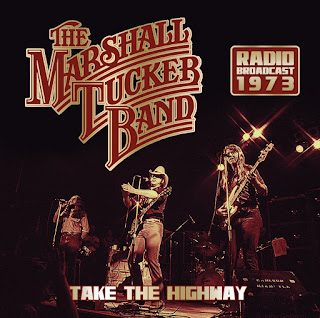 For this month’s “Bootleg Rodeo” column, the Rev has chosen to round up recently-released live CDs from Joe Walsh, Steely Dan, and the Marshall Tucker Band, with links to buy ‘em from Amazon.com.

The Marshall Tucker Band – Take the Highway (Laser Media)
As a teenaged Southern Rock fanatic, the Reverend was an avid fan of the Marshall Tucker Band. Take the Highway documents a 1973 radio broadcast from the good ol’ country boys, sourced from Ultrasonic Studios and probably broadcast on WLIR-FM out of Long Island NY. Considering the shabby sound quality, it seems like it was taped off a tin can with the string thinly stretched to another can placed at the station’s back door. This is a damn shame – WLIR concert broadcasts are usually of fairly decent sonic quality – and the MTB kicks up a hell of a performance here. With Doug Gray slinging the microphone and Toy Caldwell pickin’ on the strings, the rest of the band swings with its usual aplomb, mixing up rock and country with a bit of blues spicing it up with some jazzy licks.

Five of the nine tracks here hail from the band’s self-titled 1973 debut album with several – “Take The Highway,” “Ramblin’,” and “Can’t You See” – becoming fan favorites and staples of the band’s live set to this day. As alluded to above, the performance is high-energy and spirited, bucking like a bronco but offering some tasty instrumental jams as well. I’m not sure that I’ve ever heard a Laser Media release that sounded better than stuffing your ears with wet sand, though, and their packaging is minimally unspectacular. This often-bootlegged performance can probably be found online if you look hard enough, and the Shout! Factory set Way Out West captures a different show from the same ’73 tour that duplicates seven of the nine songs here. The Rev’s recommendation: forget about it! 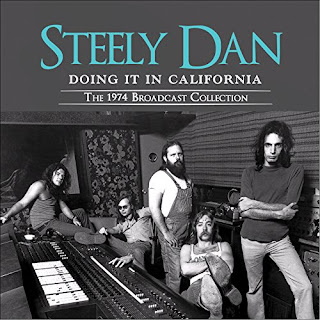 Steely Dan – Doing It In California (Sutra Records)
With the recent death of Walter Becker, ½ of the brilliant duo that was, basically, Steely Dan I thought I’d go looking for some unauthorized live stuff to share with you gentle readers. As Steely Dan basically ceased being a touring band after the release of their excellent third album (Pretzel Logic), digging up vintage recordings of the band proved to be a minor chore. Luckily, the Reverend scored with Doing It In California, a seventeen-track compilation of questionable provenance that offers up the bulk of two live shows. The first nine tracks are sourced from a March 1974 FM radio broadcast of a California performance while the back seven hail from a notorious and often-‘legged April 1974 show at the Ellis Auditorium in Memphis, Tennessee. Both performances here are top notch, the sound quality suffering a bit because of primitive recording technology but quite listenable nonetheless.

The Cali tracks include spunky performances of Steely Dan faves like “Do It Again,” “Rikki Don’t Lose That Number,” and “Reelin’ In The Years” along with a rare sighting of “This All Too Mobile Home,” which was never recorded in the studio by the band. The Memphis performance is equally as enchanting, with a little less sonic buffing done to the tapes, but featuring songs like “Bodhisattva,” “Brooklyn (Owes The Charmer Under Me),” and “Dirty Work,” the band again throwing in an unrecorded song with “Your Gold Teeth II” (different than the version on Katy Lied). A sonically-shabby version of “Do It Again” dating from a 1973 TV broadcast of The Midnight Special is unnecessarily tacked on to the end here. The band came off the road in mid-’74 and didn’t play again live until the reunion of Becker and Fagen in 1993. If you’ve checked out Steely Dan’s excellent 1995 Alone In America live set and need more, grab up a copy of Doing It In California or Going Mobile, a virtually identical radio broadcast of a similar vintage. The Rev’s recommendation: buy it! 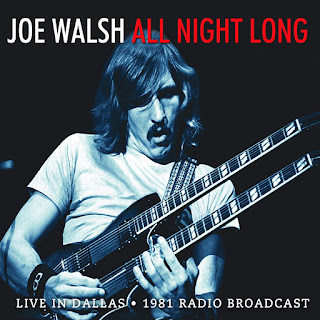 Joe Walsh – All Night Long (Smokin’ Records)
As the former frontman for the James Gang, a successful solo artist, and member of the Eagles, Joe Walsh has become a bona fide rock ‘n’ roll legend. A unique and colorful personality, Walsh is an expressive, if average singer but is nevertheless a phenomenal guitarist and a skilled wordsmith when he puts his mind to it. While his back catalog is a mess of half-realized song ideas and cocaine-fueled questionable creative decisions (i.e. much of the decade of the ‘80s), there’s precious little to criticize among his 1970s-era albums like Barnstorm, The Smoker You Drink, the Player You Get, and But Seriously, Folks. Probably due to his enduring popularity, a rash of live FM broadcast CDs featuring Walsh performances have been released as of late. All Night Long, sourced from a radio broadcast of a July 1981 concert in Dallas, Texas is undeniably the pick of the litter.

Touring in support of 1981’s There Goes The Neighborhood, this live set offers up only two tracks from that album – “A Life of Illusion” (a spruced-up old Barnstorm outtake) and “You Never Know.” The rest of All Night Long plays like a career-spanning anthology, Joe and the gang kicking out the jams with electrifying reads of James Gang faves (“The Bomber,” “Funk #49”) and previous solo hits (“Rocky Mountain Way,” “Life’s Been Good”) as well as album obscurities like “Over and Over” and “Theme From Boat Weirdos.” A couple of non-album rarities show up here, notably Walsh’s excellent “In the City,” from The Warriors movie soundtrack, and the Top 20 chart hit “All Night Long,” from the Urban Cowboy soundtrack. Altogether, this is an entertaining set and a ‘must have’ for any Joe Walsh fan. The Rev’s recommendation: buy it!!